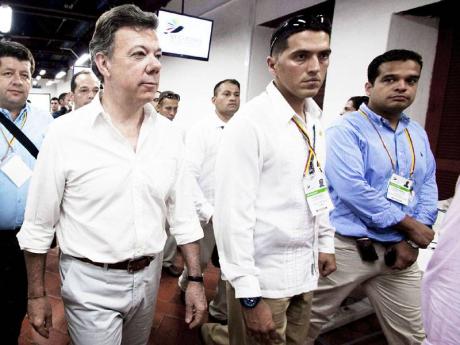 Colombia's President, Juan Manuel Santos (left), visits the press room of the sixth Summit of the Americas in Cartagena, Colombia, Wednesday, April 11. Leaders of the western hemisphere will attend the meeting on April 15 and April 16. 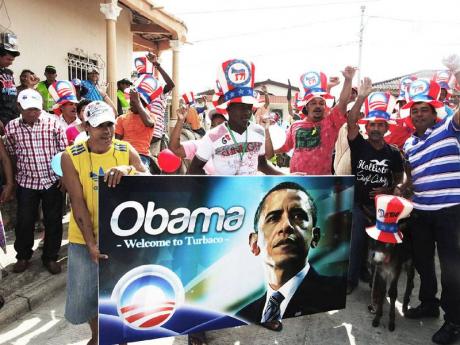 People hold a banner with an image of President Barack Obama during a traditional parade of donkeys in Turbaco, some 20 km south of Cartagena, Colombia, Wednesday, April 11. Leaders of the western hemisphere, including Obama, will meet for the sixth Summit of the Americas April 15 and April 16 in Cartagena. - AP
1
2

Colombian President Juan Manuel Santos faced a dilemma. He was set to take centre stage as host of this weekend's summit of Western Hemisphere leaders in this colonial-era port. But Washington's veto of Cuba as a participant was threatening to torpedo the meeting.

So off he went to Havana, where Cuba's leader graciously told Santos his country had no intention of spoiling the summit by insisting on an invite. Without Barack Obama, there is no summit, Raul Castro jokingly told Santos last month, according to officials with direct knowledge, who spoke on condition of anonymity because they were not authorised to talk with the press.

Disaster averted, the Colombian leader's reputation as a deft diplomat and budding power broker who gets along with just about everybody was enhanced.

"There is little question that Santos has emerged as a regional leader. This was his aspiration from the day he took office," said Michael Shifter, president of the Inter-American Dialogue think tank in Washington.

The president, a University of Kansas graduate and a scion of one of Colombia's most influential families, is widely believed to aspire to fill the regional leadership vacuum left by former Brazilian President Luiz Inacio Lula da Silva. Brazil's current leader, Dilma Rousseff, "is far less interested in the limelight and more focused on domestic priorities than her predecessor," said Shifter.

Although he has not yet shuttled among Latin American capitals to put out political fires as Silva did, Santos can boast his share of achievements and is certainly ambitious.

Last weekend, he told the Bogota newspaper El Tiempo, which his family ran until recently, he would like to persuade a re-elected Obama to stop excluding Cuba from such meetings and help the country "seek a new relation".

The statement suggested Santos would like to help end the US embargo on the communist Caribbean nation, which could in turn help him seek peace with Colombia's leftist rebels.

Latin American countries led by Brazil say they won't come to any more regional summits if Cuba is excluded again. Ecuador's Rafael Correa is boycotting this sixth Summit of the Americas because of Cuba's exclusion, but he is the lone president to do so.

Santos tamed Venezuelan President Hugo Chávez well before the Venezuelan discovered he was sick with cancer. Toning down the antagonistic rhetoric of his predecessor, Alvaro Uribe, Santos persuaded Chávez to help him capture and extradite several major Colombian drug traffickers and rebels.

His cordiality with Correa is also notable considering that, as defence minister, Santos sent troops across the border into Ecuador in 2008 to kill a top rebel with the Revolutionary Armed Forces of Colombia, or FARC, triggering a regional crisis.

Santos has risked Washington's good graces as he assuages neighbours. He extradited, for example, an alleged major Venezuelan drug trafficker back to his homeland even though he was wanted by the United States.

"In contrast to the very solicitous relationship that Uribe had, Santos has adopted a much more pragmatic and distant approach," said Cynthia Arnson, Latin America director at the Woodrow Wilson Center in Washington.

That included shelving an agreement made under Uribe to expand the US military footprint at Colombian bases.

Yet Santos, a social progressive but military hawk who was defence minister in 2006-2009, can boast of making Latin America's fourth most-populous nation a lot safer.

Afflicted by the mayhem of drug cartels in the 1990s, when leftist rebels controlled about half the national territory, Colombia is now a country where a US president finally feels comfortable enough to spend a night.

In Obama's case, it will be two nights. None of his three predecessors spent the night in Colombia as president, though all visited.

The United States can claim considerable credit for the improvement, thanks to supplying billions of dollars worth of military training and technology that helped Santos and Uribe weaken Latin America's last major leftist rebel force with operations that included killing two top FARC leaders.

Colombia isn't free of problems, though. The country remains at war, and is still the top supplier of cocaine to the United States. Its half-century-old conflict drove at least 259,000 Colombians to flee their homes last year, the human-rights group CODHES says.

Sandra Borda, a political scientist at Los Andes University in Bogota, said that to truly be a leader, Santos needs to occasionally veer from his centrist path with a bold determination.

She suggested that an area ripe for such action is the growing regional debate about drug legalisation that could dominate the two-day summit.

The drug war has cost Colombia and other Latin American nations dearly without making a dent in supply, critics say. Santos says all positions should be discussed and the United Nations should eventually decide what path should be taken.

Colombia watcher Adam Isacson of the Washington Office on Latin America says he doesn't think Santos has proven himself a regional leader, which Isacson defines as "a single country that can strong-arm the entire continent into agreeing to its priorities".

Yet, Colombia under Santos "has loosened its ties to the United States, other governments don't question its motives as much".