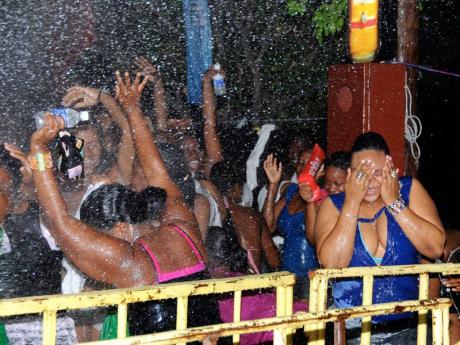 Water is never far away at Kirov Water Party, and where there is water, there is dancing. - photos by Winston Sill/Freelance Photographer 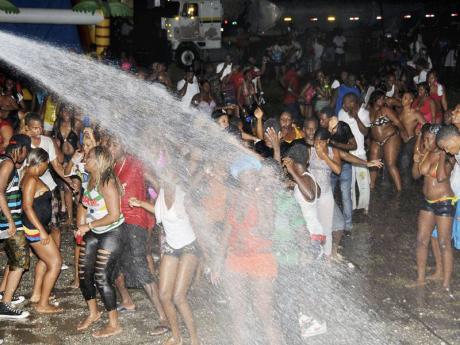 A hose from a water truck douses patrons earlier this year during Island Mas and Kirov Vodka's Official and Original Water Party at the UDC Car Park.
1
2

Brand-name performers such as Trinidad's Soca Monarch 2010 winner JW & Blaze and current dancehall heavyweight Konshens are warming to bring fire to the stage when Kirov Water Party heads to the New Kingston Golf Academy (beside Emancipation Park) tomorrow for its annual 'Carnival Edition'.

A hit in and out of the carnival season, the event has, after numerous stagings, cemented its place in the must-attend events list for scores of partygoers, based on the large following that turns out each time.

When the music starts pumping and the water trucks roll out, the party never fails.

Now, with two of the hottest Caribbean acts in their respective genres booked to perform at the event, the organisers are guaranteeing patrons a whale of a time and the usual high-energy ambience associated with the event.

According to Andrew Bellamy, promoter of 'The Official and Original Water Party', although this staging of the event is already on course to be as successful as its predecessors, the addition of the two entertainers will bring the entertainment package to new heights.

"We usually go all out when we're organising Water Party, as we aim to deliver the best possible experience to patrons. They have been supporting us over the years, so it's only fair that we pull out all stops for them.

"For this staging, we're bringing in Trinidad's JW & Blaze, and we have Konshens and, with the two, we're confident that patrons will love every minute of the event," he said.

Popular for the high-energy experience generated by the dancehall/soca beats that resonate from the speakers mixed with the alcoholic beverages in abundance at the bar, Kirov's Jared Samuel said the sponsors are pleased to be associated with the event and are anticipating a successful partnership.

"We realised that Water Party is a really high-energy event and Kirov is glad to be associated with them, and we want to ensure that we can deliver a good, quality time to patrons while drinking Kirov vodka responsibly," said Samuel.

He said free Kirov vodka mixes will be flowing all night at the bars.

ZJ Chrome, DJ Sanjay, Chris Dymond, Razz 'n Biggy, DJ Billy and Shane Firestarter are among those slated to take patrons through the motions on the night.

Attractions at the event will include water slides, rides, body painting and piercing.

Tickets for Kirov Water Party can be purchased at Avery's Beauty Concept on Molynes Road, Genus Pharmacy in Portmore, Xtras in Mall Plaza and Manor Park, Giscombe Sports in Half-Way Tree, The Spot at the University of the West Indies, Little Tokyo in Sovereign, Glitter in New Kingston and the Almond Tree Bar on Red Hills Road.