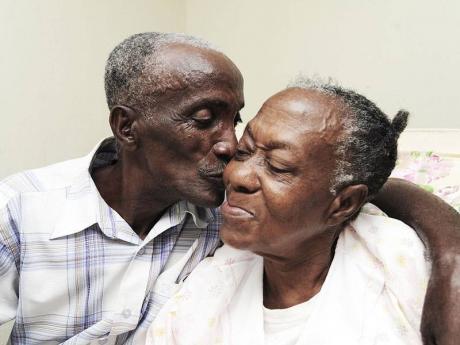 Theirs is an incredible love that after 50 years, looking at them looking at each other, the spark that lights up their eyes and the love that radiates when they tenderly touch filters throughout the room and tugs at the heart of anyone observing the adoring couple.

Seventy-year-old Herman Hardy and his 69-year-old soulmate Bernice have a love that has grown so strong no one believes they can live without each other.

Since the day they laid eyes on each other in 1961 as teenagers, they knew it was love at first sight and that they were meant for each other.

Although they simultaneously went to Cavalier Elementary School and lived in the Cavalier community in rural St Andrew, it wasn't until they both started working at the community church that their paths crossed.

That afternoon when 19-year-old Herman saw this bright, active 18-year-old Bernice Hunter at work, he had no doubt whatsoever that she was the one for him. Within months, he had made up his mind that she would become his wife and the mother of his children.

"She had everything that I asked the Maker for in a woman. I asked God for an educated lady, her hair not too long with a Christian background, and she mustn't be the jealous type," shared Herman.

"I never love the up and down thing, I just wanted to settle down with the right person."

For Bernice, "He didn't have a lot of girlfriends."

Everyone burst into laughter.

She added: "Him don't cuss and fight and didn't go to dance."

Their families were against the marriage, feeling they were too young, but they were determined that this was what they wanted.

Herman's father gave him a plot of land in Rose Hall district in rural St Andrew, and the couple built their home, where they raised their six children.

As a carpenter, Herman was often away from home for months at a time working on construction sites across Jamaica or other Caribbean islands.

Bernice was a teacher at Unity Primary and later Lawrence Tavern Primary near her home. Her goal was to attend teachers' college to further her love for teaching, but with Herman being away so often and her desire to see her children turn out to be the best, she gave up her dream and focused all her attention on her family.

Instilling love, discipline and a passion for achieving the best in her children, she continued teaching, while also being an active member of the Lawrence Tavern Seventh-day Adventist Church.

"In all my years, I have never heard my parents quarrel, ever. They are the most peaceful and loving people I know," shared Orrett.

He added: "My mother is one of the most generous persons I know. She loves to give and just keeps giving and never stops. She raised a lot of children right under this roof that we grow up in. So many, many children."

For Sheldon, he is proud to have had a solid foundation.

"We were brought up with strict principles. One of the greatest things people always said was how my parents raised five boys and none of us got into any trouble or they ever heard our names called in anything bad," stated the youngest.

"She is also the best pudding baker," Sheldon added, to much laughter. "The best baker of everything. She used to bake wedding cake for other persons."

How did the Hardy parents do it?

"We give them to the Lord," Bernice said.

Indeed, all her children are still very grounded in the Christian faith and, wherever in the world they now reside, that family bond is still very strong.

Herman also credits it to God and the "best wife any man could want in this world".

As far as he is concerned, the life he lived and thoroughly enjoyed would not have been possible without Bernice.

"The Bible said who can find a virtuous woman. She is it. She is such a brilliant woman, an excellent mother and wife. I really, really don't know what I would do or be without her. She is my soulmate, my everything," he said, looking at his wife lovingly.

After a moment of tenderness, he looked up and said: "We have never had an argument, never. Sometimes I will do something and she will look at me and say 'Daddy, don't spoil it. Don't spoil it,' and I just smile.

"When I go on the road and people see how I well put together, they would say, 'Herman, how you look so good'. I would tell them is not me, is my wife."