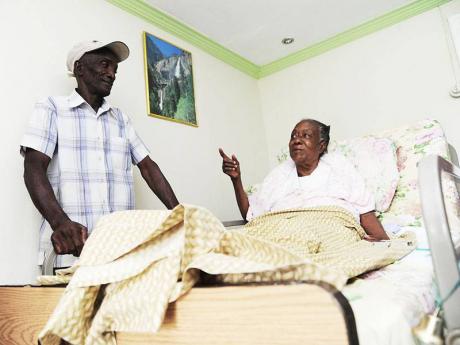 The following is a continuation of the love story between Herman and Bernice Hardy.

The life of the once active Bernice Hardy was dramatically altered when she had a massive heart attack in 1997, which led to triple-bypass heart surgery. The doctors told Bernice and her then husband of 35 years, Henry, that she would have no more than five years to live, but her optimism and strong Christian faith fuelled her desire for a much longer life with her family.

Thirteen years after the surgery, however, Bernice suffered a massive stroke, which crippled the left side of her body. This has left her bedridden, only able to get around by the use of a wheelchair. The stroke also affected her speech and she is restricted to the use of adult diapers. She also has hypertension and diabetes.

"She has been at death's door so often. Sometimes when I go look for her in the hospital, my heart hurt me because I never feel she would make it, but she so determined and positive about life. I am the one always worried, but not her at all," said her husband.

Still living in the home they have shared for the past 50 years, which has been greatly expanded to accommodate children Orrett and Sheldon and their families, Herman is honoured to play caregiver to the woman who took care of him for so many years.

"I give God thanks I am able to assist her," he said.

The family pays special tribute to Bernice's caregiver, Eunice Daley, who they hail as "one of the best".

"I still travel doing construction work and I never worry yet about how she doing because Eunice take very good care of her," said Herman.

The kindness that Bernice has shown to people over the years has been coming back to her family in spades.

"She is well loved in the community. People just keep sending or carrying things for us. We are never in need of anything. Everywhere you go, people stop and ask about her, remembering what she did for them, and they are always sending something," said Herman, his boys agreeing enthusiastically.

The Hardy children and three grandchildren are now quite busy preparing a big 50th anniversary celebration for their parents on May 6, which is expected to see the entire family and friends from all over coming together at their home.

Sharing their 50th anniversary the same year as Jamaica's Independence, over the years, Herman and Bernice have journeyed to Kingston to celebrate the national celebrations and their anniversary together.

In this jubilee year for the country's grand 50th, they are hoping to do the same, but only if Bernice is up for it.

Walking step by step alongside Jamaica's 50 years of Independence, Herman believes it is a good milestone. He has seen a lot of improvement, but feels it falls short in terms of proper infrastructure, as there were several areas across the island that lacked basic things like piped water.

Bernice agrees that there has been a lot of improvement but thinks it could be better.

She has been at death's door so often. Sometimes when I go look for her in the hospital my heart hurt me because I never feel she would make it, but she so determined and positive about life.