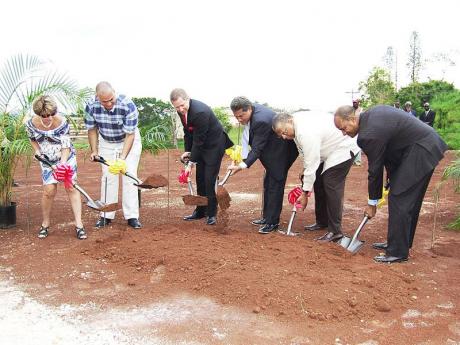 MANDEVILLE RESIDENTS are one step closer to having a super store to shop and gain employment, with the groundbreaking of MegaMart's $1.2-billion store, held at the location on Bloomfield Road in Mandeville on Wednesday.

The project is scheduled to be completed in the next 11-12 months.

The Mandeville MegaMart is set to have a significant impact on Manchester, with the anticipation of providing jobs in the construction phase and jobs for up to 200 permanent employees on its completion.

There will also be business opportunities, especially for small farmers in the parish, who will have the opportu-nity to supply their farm produce to the store.

The project is being funded by Scotia Investment, a part of the Scotia Group Jamaica in a Build Own Lease deal. The investors are pension funds and insurance companies and will own the building and collect rent for it.

"It's a win-win financial solution for both MegaMart and its investors, which became possible because of the public trust built by MegaMart over the years," Gassan Azan Jr, chief executive officer of MegaMart Wholesale Club, said.

Bruce Bowen, president and chief executive officer of Scotia Group, said his company was delighted to be part of the project. "It's an opportunity for us as Scotia Group Jamaica to highlight a very innovative financing structure. It was something that when Gassan Azan approached us, we talked about the fact that it was a model, which in most developed market most large retailers used to expand quicker than their capital base might otherwise allow."

Bowen added: "We felt that the financial market in Jamaica has developed and settled down to a point that it was something that we would be able to do in Jamaica."

In his remarks, Minister of Finance Dr Peter Phillips said he was pleased with the project. "This investment of over $1.2 billion is an example of the kind of creativity that we hope to see in the Jamaican economy, of new projects and new production stream," he said.

Phillips commended Scotiabank for facilitating this particular type of investment. "The Build Own Lease model is one that we believe not only has relevance for private sector, but it is something that we are actively pursuing as part of the public/private partnership arrangement that we think that can be applied in the public sector as well," Phillips said.

"In a time of fiscal stringency as we are in now in, there is ample opportunity to use this kind of mechanism to expand the infrastructure of the public sector, schools, hospitals, road systems and the like, and in the very near future we will be finalising our policy on private-public partnerships."