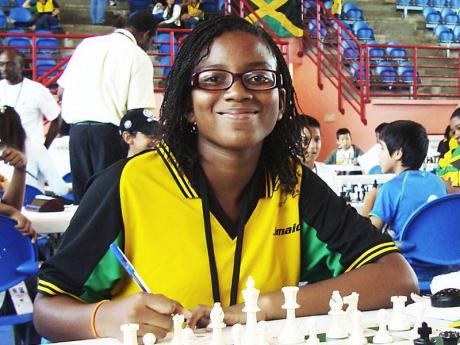 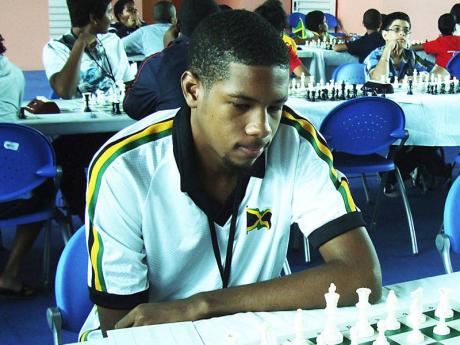 Two Jamaican Carifta Chess champions were crowned this week in Trinidad at the Inaugural Carifta Chess Tournament - Sheneal Gardner for the girls Under-12 section and Stuart James in the open Under-20 category. Jamaica with its 10-member team placed third overall in the tournament and collected the most awards.

Other winners and awards in from the squad of 12 players who returned this week included a third-place Carifta title for Shreyas Smith in the open Under-16 section, a gold-medal award to Alistair Walker who was fourth in this section after ending on the same points as Shreyas Smith; Rachel Miller playing in open section of the open Under-12 section was awarded the second-place Carifta title, while Elias Issa who finished fifth in this section was awarded a silver medal. Nathan Chin played in open Under-12 and was awarded a category age-group prize of a gold medal for being the best Under-8 player.

Ewarton Primary dominated the winners' circle when approximately 200 kids gathered at the Dinthill Technical High School in Linstead, St Catherine, two weeks ago, to match their wits in the NCB-sponsored Challenge the Mind Chess. This series has, for the first time, ventured out of the city.

This tournament was put on by Chess Unlimited - with principals International Master Jomo Pitterson and Fide Master Warren Elliot, along with the St Catherine-based Royal Chess Academy run by NM Mikhail Solomon.

Oliver Tomlinson, manager, business development at NCB Insurance Company, was on hand to give out prizes and was pleased with the numbers and general experience that his brand had with the event.

The battle among our top players for bragging rights on who is Jamaica's best chess player starts today at the Spanish Court Hotel. As it is every two years, there is even greater interest in this tournament as the coveted Olympiad picks are determined by this event. The Olympiad will be in Istanbul, Turkey, in the summer.

The final cut of 24 players and round-one pairings for those who have confirmed their interest in the challenge in the National Open tournament are:

Continuing our profiles of these players, we look at FM Warren Elliot (2251), full-time chess coach FM Elliot has not played a long-form chess tournament in Jamaica for more than year. However, he is a proven performer in this tournament, having held this title six times - 2000, 2001, 2004, 2005, 2007 and most recently in 2010. No one has won this tournament more times than FM Elliot. His six-title haul is equalled only by NM Robert Wheeler and NM Harold Chan. However, while both these other champions have on occasion shared their title, FM Elliot, a past student of Cornwall College, has always stood atop alone.

IM Jomo Pitterson (2234), Jamaica's highest Fide-titled player [after GM Maurice Ashley who has never represented Jamaica), is also a player who has not been active on the local chess scene for sometime now. IM Pitterson has held the national title three times - 1992, 1993 and 1999. Respected as currently one of Jamaica's strongest who is closest to gaining that coveted GM title, IM Pitterson, a past student of Campion College, is viewed as being ahead of the field when challenged.

NM Mikhail Solomon (2058), full-time chess teacher and coach, has never held the national title. He has played in two major tournament in the last year, the St Jago Open in July 2011 and the Jamaica Open in October 2011. A stealthy player who is not to be ignored.

NM Peter Myers (2044) is a hard-core chess enthusiast who has never held the national title, but is in constant preparation to get there and had a good run in last year's competition, but was derailed in the last rounds after being an early leader. One of the most active of the higher-rated players in the Jamaican circuit, NM Myers, in the last year, has played in the St Jago Open, the Jamaica Open, the Middlesex Open, the Frederick Cameron Open, the Robert Wheeler Open, the John Powell Memorial Open, and might be described as the most active of all the NM in Jamaica. NM Myers, a past student of Campion College, is in permanent prep to play quality chess.

Shreyas Smith (1873) from Calabar High rocks the hearts of top-flight players whenever he plays them, because the stronger the opposition, it would appear, the stronger he plays. He required Jamaican chess analysts to stand up and pay attention when last December he won the Frederick Cameron Open, claiming scalps of a CM, an NM and an FM. Super active, as most engaged chess juniors usually are as they possess that luxury of leisure time, he has hardly missed a chess outing in the last year, and returns from national duties in Trinidad this week primed and hungry. We are sure for bigger scalps.

Ian Wilkinson (1929) is an active Jamaica Chess Federation president who takes his chess very seriously. While required to administrate the national affairs of Jamaican chess at home and abroad, Mr Wilkinson, with chess set out in his office all the time, and programmes and online games constantly running on his computer he is known to be always prepping for the challenge. Wilkinson has never won the title, but is considered capable.

Betram Scott (1978), renowned as one of Jamaica's most passionate players, but has never won this title. He has been in silent preparation for this year's tournament, and expects that he will do well. He is last year's Presidents' Invitational winner, but has not been very active locally though he carefully selects and participates in tournaments abroad. Today, he meets the number-one ranked Duane Rowe, whom he says he beat when they last met many years ago in the Clarendon Open. And to the best of ChessMate's knowledge, Scott is the only player in the tournament with a sponsor in the form of Jamaica National Building Society, whom he will represent starting today.

Profiles will be completed next week. Correction on last column: WFM Deborah Richards is not the first woman to play in the Open National tournament, this was previously done by Dr Hope Anderson. Richards, too, has on a previous occasion played in the Open tournament.

More from the official rules of chess: Rule 4.3 Except as provided in Article 4.2, the player having the move deliberately touches on the chessboard: c. One piece of each colour, he must capture the opponent's piece with his piece or, if this is illegal, move or capture the first piece touched which can be moved or captured. If it is unclear whether the player's own piece or his opponent's piece was touched first, the player's own piece shall be considered to have been touched before his opponent's.