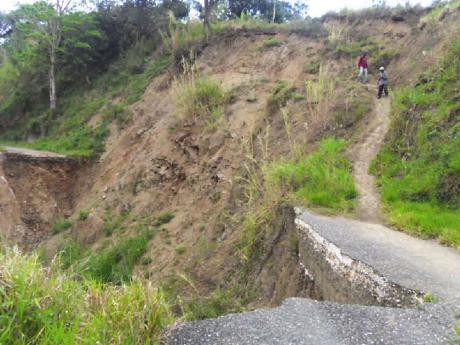 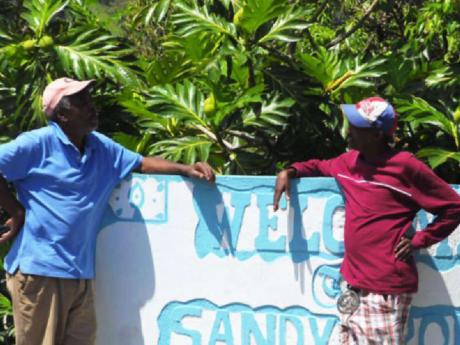 Ransford Harrison (left) and Orville Richards, residents of Sandy Ground discuss the breakaway and the lack of potable water in the community. - Photo by Karen Sudu
1
2

IT'S BEEN 20 years since Hartnel McCalla has been operating a shop in his hometown of Sandy Ground in west central St Catherine.

The business was established to boost earnings from his farming activities. However, since the passage of Tropical Storm Nicole in September 2010, McCalla's entrepreneurial activities have hit a brick wall.

"The road break away and no vehicle can drive past the shop. Before the road break away, vehicles used to drive through from Brown's Hall to Marlie Hill, come down through Bellfield and come to Sandy Ground, and sales wasn't bad," the 66-year-old explained to The Gleaner when our news team visited the community recently.

"Not only that, the customers who used to walk from Bellfield cut off from us, so I lose all that support. Now God bless when I sell $500 one day. I can't pay mi bills. JPS cut off mi light; the shop is almost empty," the dejected senior bemoaned.

Some residents have created a bypass alongside the breakaway, however, McCalla and another member of the community, Orville Richards, demonstrated to our news team the high level of risk associated with using the track.

"The dirt can tear down any time and you drop in the gully," Richards said. "It no safe! It dangerous, but some people still take a chance," he said.

Deputy mayor of Spanish Town and councillor for the Ginger Ridge division, Ralston John Wilson, contends that the National Works Agency (NWA) must be held responsible for failing to take preventative measures.

"The breakaway should not have happened because signs were shown and the NWA knew about it. I took them there and showed them where the road cracked. The water was seeping underneath the wall. I asked them to pin the wall behind it, and they did nothing," an irate Wilson told The Gleaner.

Motorists now bypass Bellfield and use the alternative route through Blue Hole to get to Sandy Ground en route to Connors and Ginger Ridge. However, Ransford Harrison, a 58-year-old farmer said the route is inaccessible to large vehicles.

"Big vehicles cannot drive on it because if you have a truck carrying a load of sand, it have to go to Bellas Gate and come round miles into Connors back into Sandy Ground because that road narrow and breaking away too," Harrison told The Gleaner.

He said the massive breakaway in the deep rural community has worsened the residents' struggle with the lack of piped water.

"The area that we get water from, dem cut it off over 15 years now. Is truck carry water in here now. We have to go spring, or we depend on rain water because now no truck can take water into the community. We are suffering," he noted.

Adonijah Peterson, pastor, Connors Church of God in Christ, is imploring the relevant authorities to take immediate action to repair the affected roadway in order to restore normalcy to the community.