'Ruined' brings School of Drama and NGOs together 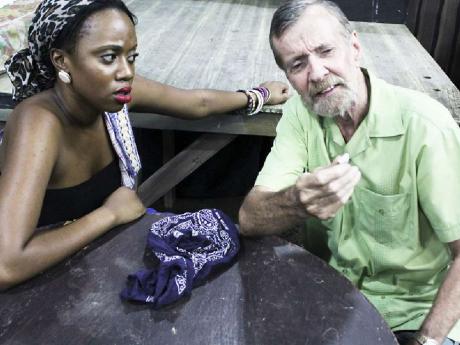 'Mama Nadi' (Risanne Martin) seeks a costing for a piece of diamond from Mr Harari (Bob Kerr) during a rehearsal for 'Ruined', which begins playing tonight. - Contributed

The Edna Manley College of the Visual and Performing Arts' School of Drama yesterday opened the doors of the Dennis Scott Studio Theatre to welcome audiences to a display of drama, courtesy of the college's talented student theatre artists.

The Pulitzer Prize-winning play Ruined, written by Lynn Nottage and directed by the School of Drama director, Eugene Williams, is endorsed by the Peace Management Initiative and Women's Media Watch, which are among a number of non-governmental organisations (NGO) associated with the production.

The play is a compelling, gritty, story of the plight of women - survivors of sexual violence that unfolds in a ramshackle brothel in the Congolese jungle where government soldiers, warlords, prospectors and miners seek sustenance and sexual satisfaction.

It offers critical parallels with local Jamaican communities, in which a similar raw and chilling violence is used by criminal gangs and 'warring enclaves' to enforce their rule and perpetrate fear.

The supporting NGOs have dedicated their work to the reduction of conflict, as well as the promotion of equality and the protection of human rights. This endorsement will provide these organisations with an opportunity to highlight some of the comparable social issues at stake in the local arena through the meaningful, immediate and entertaining power of theatre. Information about their efforts of intervention will also be on display.

The geographical and socio-political backdrop of the production is the horrific five-year civil war in the Democratic Republic of Congo that was perpetrated by power-hungry warlords and complicated by ethnic segregation, interstate ethnic alliances and genocide. In this war-ravaged setting, the playwright constructs an emotionally textured, old-fashioned drama in which beauty, love and human possibility are determined to birth from dream to reality.

Ruined is about resilience and survival of the primary victims - women, whose bodies are used as weapons/tools in a perennial conundrum of brutal armed conflicts, propagated by power-hungry men in the Democratic Republic of Congo, and by inference in all other places where similar injustices desecrate lives and pulverise communities.

The play will also be mounted next week from Friday through Sunday. Again, it will begin at 7 p.m. on Friday and Saturday and an hour earlier on Sunday.