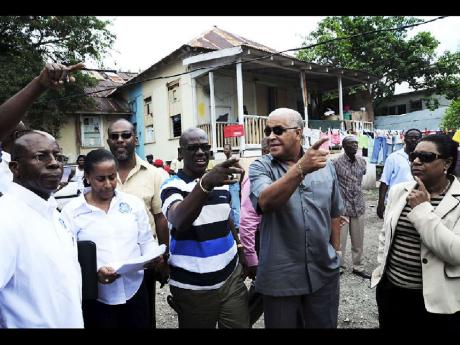 LESS THAN
one week after a Sunday Gleaner exposé about the
90-day notice served on residents of a property at the corner of East
and Beeston streets in downtown Kingston, the Government has granted
them a reprieve.

The more than 40 adults and 26
children were told yesterday that they could stay at the state-owned
property for an extended period instead of the May 9 deadline that they
had been given by the National Land Agency.

The period
of the extension is still to be determined, but it appears that
residents could be given up to 12 months.

Following a
tour of the premises yesterday, Minister of Land Robert Pickersgill and
Minister with Responsibility for Housing Morais Guy announced that the
Government was exploring several options to resolve the plight of the
residents.

"We have heard the cries of the residents
for leniency, and it has not, nor has it ever been, the intention of
this administration to penalise persons for the circumstances in which
they find themselves," said Pickersgill.

"I want to
add that although eviction seems a hard-line stance to take, we cannot
condone the illegal occupation of government and private lands," added
Pickersgill.

That was a position supported by the member
of parliament for the area and opposition parliamentarian, Desmond
McKenzie, who welcomed the extension granted to the
residents.

"I am very, very satisfied with what has
happened here today and I want to thank ministers Pickersgill and Guy
for coming here today and responding to the plight of the residents,"
said McKenzie.

"I want to make the point, and I might
offend some people when I say it, but whatever extension that is granted
by the minister of lands ... should not be taken as a passport for
continuous living.

"I think these people have to try,
in whatever way they can, to find alternative accommodation," added
McKenzie.

He noted that a committee was being
established to work with the residents and social workers to arrive at a
solution.

That committee will have the input of
social workers from the Ministry of Housing.

Guy
pointed out that every effort would be made to assist the residents'
move from the substandard conditions they now live
in.

"We have to ensure that in their relocation they
don't move from one site that is like this to another which is as
undesirable as this one is," said Guy.