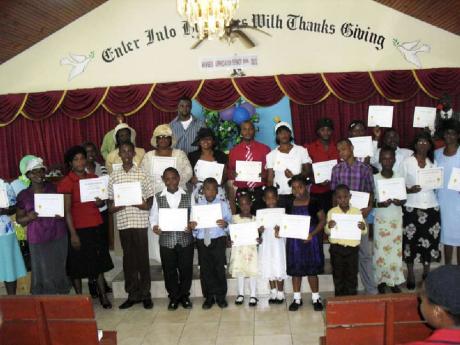 Members of the Grey Ground New Testament Church of God pose with their certificates during a prize-giving ceremony. - Photo by Dave Lindo 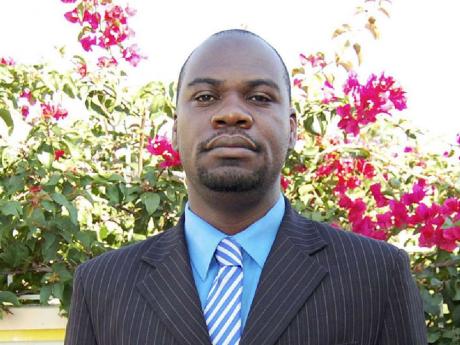 THE GREY Ground New Testament Church of God, Manchester, is making a positive impact on the community, which is often viewed as one of the volatile areas in the parish.

If pastor of the church, Stenneth Davis, had his way, there would be even more positives coming out of the community in the near future.

Davis has been at the helm of the church for just over one year and six month. As he disclosed, it was somewhat of a culture shock when he was first appointed pastor.

"On hearing about going to Grey Ground, I was a bit shaken and taken aback because of the image that is in the public of that community. I was a bit concerned about going into a community like that, but I said my prayers and said, 'Lord if you are leading, then I have to follow'."

He said it was a different situation when he actually went into the community. "Interestingly, the image that is portrayed on the outside, getting into the community, I realised it is much different," Davis said. "I saw where good is truly being suppressed by evil. There are a lot of good things about the community."

He said that the Church could no longer be seen as a place where people gathered and worshipped when the social fabric of the community that surrounds it is deteriorating.

The activities, as disclosed by Davis, include a monthly prayer walk through the community, which, he said, is appreciated by Grey Ground and neighbouring communities.

He said that public transport operators were involved in worship sessions and added: "We also have a pre-Mother's Day banquet, which brings a formal touch to the community, also children's conventions and rallies."

Davis his mission also includes getting people to move back into the community and making financial investments to foster economic growth.