For the 'grater' good - Engineer seeks sponsorship for inventions 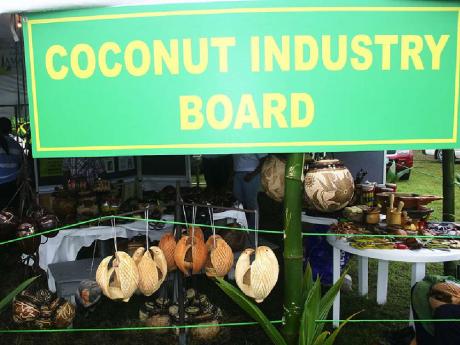 The Coconut Industry Board booth was one of the more popular stops at the St Mary Agri Expo held at the Grey's Inn Sports Complex. In addtion to craft items, it also showcased cooking with coconut milk in different ways. - Photo by Christopher Serju 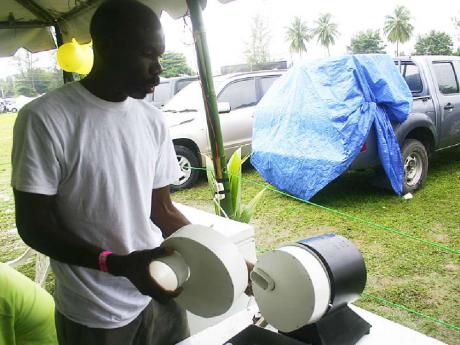 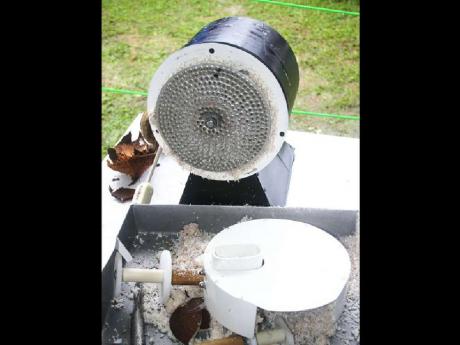 The motorised grater, built by Paul Jackson, uses a blade which he claims has a shelf life of about five years. It was on display at the St Mary Agri Expo on Monday, April 9, at the Grey's Inn Sports Complex. - Photo by Christopher Serju
1
2
3

LOTS OF encouragement but no financial assistance is how Paul Jackson summed up the general response to his motorised grater, a device suitable for grating coconut, cassava, or sweet potato as needs dictate, much faster than by hand. The Gleaner caught up with him inside the Coconut Industry Board (CIB) booth at the St Mary Agri Expo Booth on Easter Monday, where one of the machines was on display.

"Let's say someone wanted to grate, like, 500 pounds of cassava to make bammies. This could do it in maybe an hour. It's also ideal for people who do coconut products in that it saves time as against grating by hand," he shared.

The machine on display, made by Jackson who lives in Fair Park, Spanish Town, belongs to the CIB, and while people who stopped to check it out were very impressed, he got no orders. The appliances are built to order and cost varies between $35,000 and $50,000, depending on the strength of the motor required, the cost of which, at an average of $15,000, is a major factor.

Most of the housing is made from PVC (polyvinyl chloride) piping, the stand from sheet metal, and the 'face' from plastic - showing the use of easily available and relatively reasonably priced material. The machines are made to order as Jackson explains: "The machine is basically handcrafted because it's not like I have any workshop to manufacture them. My intention is to have them standardised. So let's say someone needs a replacement blade, I could just ship it to them. Right now, parts have to be customised for the particular machine."

A graduate of Dinthill Technical High School, Jackson, who holds a first degree in engineering from the University of Technology (UTECH), has been technically inclined from childhood and had aspirations of building such an appliance long ago.

"Back in the days, there was a neighbour who used to bake bammy and we used to carry cassava for him and he used to grate it by hand. It was from that time that I had the idea to make a machine that can do it powered instead of manually," he recalled.

However, it wasn't until he was made redundant from his job at the Bureau of Standards Jamaica in 2001 that the St Catherine resident was pushed into pursuing his dream. Since then, word of his expertise has spread mostly by word of mouth, and he gets calls from people who want him to fashion a machine to suit their particular need. The requests range from minor adjustments to existing appliances, retrofitting or designing, and manufacturing to suit specific needs, usually from small-business operators.

"It might be someone wanting something to mill ginger, to get it to powder, or something like that. They know what they want but don't know if or how it can be done. I never tell them no," he said. Still, the desired financial support to take his inventions to the next level has not been forthcoming.

"I want to bring these machines to international standards because it is very applicable in our setting in Jamaica for persons who are involved in small production in areas such as bammy, and bakers who use a lot of sweet potatoes. Sometimes I get a lot of encouragement but nothing financially, like some kind of assistance programme," he explained.

However, Michael Black, a director of the Michael Black's Coconut Farm in Nutts River, St Thomas, was on hand to give a rousing endorsement of the appliance.

"I recommend it highly. It can do about 200 coconuts in about two to three hours, that grater. That is not one of the larger ones, but it can definitely make life a lot easier," he told The Gleaner - this from someone whose operation reaps about 10,000 coconuts daily for use in its coconut water and cold press coconut oil business.