A pinch of love 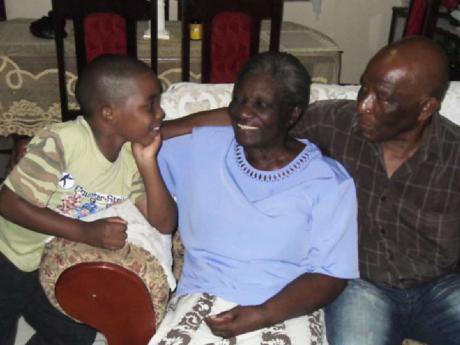 Enid and Adonijah spend time with their grandson Neil Jr. 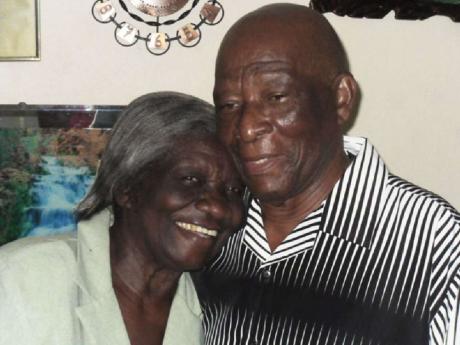 ADONIJAH AND Enid Peterson are like two peas in a pod. Some may even say they are joined at the hip.

Adonijah was born in Kentish, while Enid hails from Connors. Both are districts in west central, St Catherine. It was in 1957 when Enid began her sojourn at the Kentish Primary School as a pre-trained teacher that they met.

"When I was going up to Kentish, to where I would be staying, the Sunday evening, I saw these four young men all dressed in black pants, white shirts, and black ties. As a new teacher, I just passed and said 'Good evening', and they said 'Good evening'," Enid related, smiling shyly, eyeing her mate.

But as the 78-year-old recounted, it didn't stop there.

"I wasn't living too far from him. I could stay up the house, and sometimes I saw him driving his goats down to his farm. Then one of his friends was going off to England, and they invited me to the send-off party. When I was leaving, I felt this pinch on my left hand and I said 'Who pinched me?' and I saw this broad grin on his face," Enid continued, evoking a burst of laughter from her husband.

That tweak marked the beginning of three years of courtship before they tied the knot at the Phillipo Baptist Church in Spanish Town, St Catherine, on December 21, 1960.

"From there, we just continued falling in love over and over and over again," 74-year-old Adonijah, a tailor in his earlier life, said hugging his wife as they sat on their veranda at their home in Connors.

For him, the 51-year marriage has been built on a solid foundation, with various ingredients.

"Love, communication. You must communicate and respect each other's views and opinions, and never you run out there and do things unless you discuss them with your partner," the former Public Works Department employee for 17 years said.

His wife, a teacher for 46 years, added forgiveness to the list. She noted that the grace of God had been the primary ingredient.

"The goodness of the Lord has kept us together. How you handle and get over the problem is important as well. If you allow the problem to get you down, you won't be together," Enid shared.

For those who will be getting married, Enid has some advice.

On December 23, 2010, the committed couple renewed their wedding vows at Connors Church of God in Christ. The reception was held at the Ginger Ridge All-Age School, where Enid spent most of her life teaching. Several of her past students joined in the celebration.

"It is love, the love they have for each other, because love is not from the outside, it is from within. As children, we saw that they loved each other," he told The Gleaner.

Asquith said that he and his siblings were truly indebted to their parents for their care and guidance during their formative years.

"They were kind. They treated us well. They made sure we went to Sunday school. They were disciplinarians. They taught us to have manners, show respect, and take care of older people," he added.