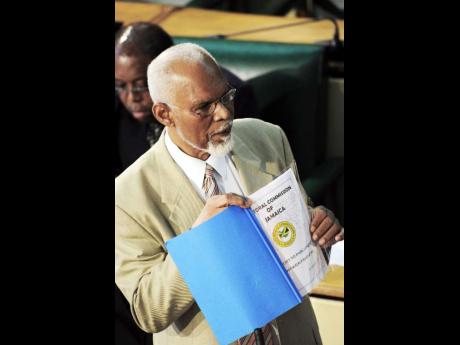 Senator K.D. Knight contributes to the debate in the Senate yesterday on the Electoral Commission of Jamaica's report on campaign financing. - Norman Grindley/Chief Photographer

LEADER OF Government Business in the Upper House, Senator A.J. Nicholson yesterday expressed support for elements of the Report on Campaign reforms from the Electoral Commission of Jamaica (ECJ) but made it clear that he wants no limit to be capped on financial contributions to political parties.

"This is a personal hope and expectation. I am of the strong belief and it will take a mountain to convince me otherwise that all campaign donations should be made public. My strong belief, because, that's the only way that the playing field can be levelled," Nicholson.

According to him, the integrity of the system could not be firmly achieved without proper rules being established regarding financial support of political parties and campaign financing. He said the report highlighted some of the dangers of not completing reforms, among them, the unregulated flow of money into campaigns.

This often has negative consequences which could lead to inherent dangers, he suggested.

"Proper regulation of campaign financing is a sine quo non for the placing of our electoral process on even firmer footing. I will have something to say about my regrets that we were not able to reach a position that all campaign donations be made public," Nicholson said.