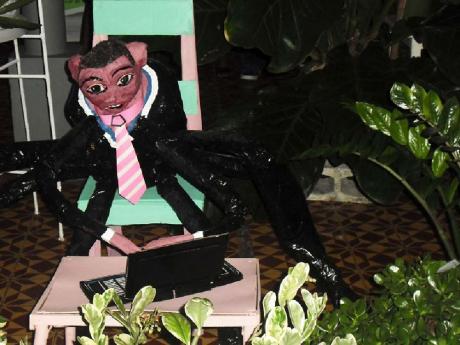 Anansi on his laptop surrounded by plants. 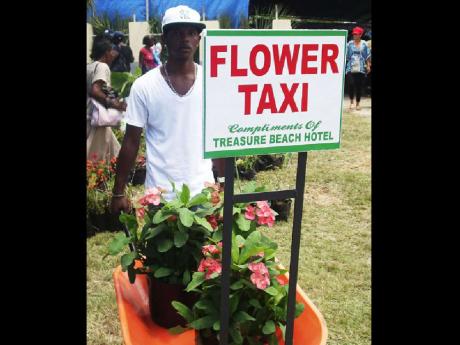 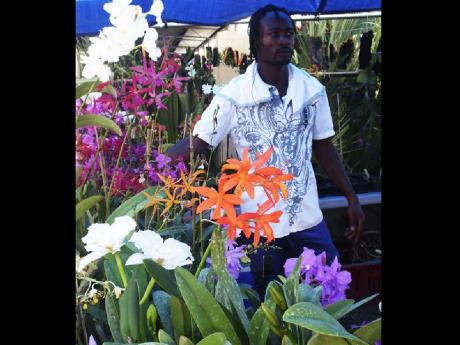 An employee of Hamlyn Orchids surrounded by different varieties of the plant.
1
2
3

A DISPLAY which featured Anancy using a laptop computer, 'River Mumma' on a BlackBerry phone, people moving from booth to booth, a flower taxi, renditions on a steel pan, and a variety of plants on display were among the sights and sounds of the St Elizabeth Horticultural Society Annual Flower Show.

The event, which is in its 50th year, had a large number of patrons visiting at various times throughout the day on Easter Monday. Apart from the traditional plant exhibits, the event, which was held in Black River, featured an area where children could access rides all day and an entertainment presentation in the second half of the show.

Allison Morris, one of the organisers of the event, said, "The society and the show have helped to build an awareness among the people of St Elizabeth of the importance of horticulture and the pleasure you get from growing your own plants."

She further explained that the show helped to showcase St Elizabeth to the wider society, given that people from across the world attend the event.

One of the judges, Dalton Stewart, who, is also familiar with the show since its inception, proclaimed the event to be the best yet.

"Over 50 years, this ornamental society has grown in the magnitude of strength in terms of the quality stuff that they produce, the variety. This is one of the biggest shows. It seems that they have really put out their all to make this show one of the best," stated Stewart.

Show veteran Claude Hamilton, who was at the inaugural staging, said, "The show has expanded both on the outside and on the inside." Hamilton, who specialises in commercial orchids, said he had noticed improvements in the organisation of the show since its inception. He said initially, the vendors used to be disorganised, but they have now been confined to one area.

A patron told The Gleaner that she had been attending the show for eight years. While she would like to see more varieties, she was hoping for bargains on her favourites - hibiscus, roses, and crown of thorns.

Morris dubbed the show a success, especially since there was a good range of exhibits which people could view in an uncluttered environment. She encouraged persons to get involved in garden clubs, which are located across the parish.