Honours even on day one 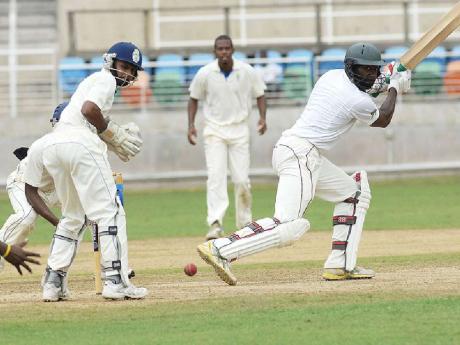 Jamaica's top batsman Donovan Pagon guides a delivery through the slips during his topscore 71 against Barbados at Sabina Park yesterday. The action is from the opening day of the West Indies Cricket Board's Regional Four-Day final. The wicketkeeper is Shane Dowrich. - Ian Allen/Photographer

Jamaica made a fairly good start in their quest to land an historic fifth straight West Indies Cricket Board Regional Four-Day Tournament title when they closed on 266 for eight against Barbados on yesterday's opening day of the final at Sabina Park.

Winning the toss and electing to bat on a flat batting track, Jamaica were propelled to their total on the back of a stroke-filled 71 from Donovan Pagon, a welcome back-to-form 58 from Brenton Parchment, and an unbeaten 29 from Nikita Miller.

Barbados, on the other hand, were led by spinner Sulieman Benn who claimed five for 90 off 29 unchanged overs, and all-rounder Carlos Brathwaite, who took two for 38.

"I would not say it is an ideal total as at we would have loved for the score to be at 266 for the loss of about four or five wickets, especially after being at 150-odd for one at one stage," said Jamaica captain Tamar Lambert.

"But such is the nature of the game. The game is still in the balance and it is for our remaining batsmen to come out and try to push the total past 300," he added.

Opening with Parchment and Xavier Marshall, Jamaica got off to good start with the duo taking the score to 46 before Marshall, flashing at a delivery just outside his off stump, was caught behind by the impressive Shane Dowrich off the bowling of Brathwaite for a rusty-looking 19.

This brought to the crease the team's leading and the tournament's third-highest run-scorer heading into the match, Pagon, and together with Parchment the pair put on 108 for the second wicket before Parchment was caught at long on off the bowling of Benn with the score on 154.

It was perhaps Parchment's most fluent innings of the season as he looked solid, both in defence and attack. He hit seven fours during his knock which came off 138 balls.

The out-of-form Danza Hyatt then made his way to the crease but his stand with Pagon did not last long. Pagon, not for the first time this season, went for a lazy on drive off the persistent and talkative Benn and was caught off the leading edge at short cover.

Pagon, who would have no doubt impressed West Indies selectors Courtney Browne and Robert Haynes, with his attack-minded stroke play, hit seven fours and two straight sixes off Benn during an
innings which earned applause at the end from the biggest crowd to
attend a match on the first day this season.

Using his
experience and extracting fairly good bounce and turn on what is fast
becoming a spinning wicket, Benn then went about claiming the wickets of
Lambert (15) and wicketkeeper Horace Miller (15), while the lanky
Brathwaite, who got the ball to jump from good lengths, got rid of Hyatt
(15) and Bernard Jr (four).

Miller, who has been
batting with defiance, and fast bowler Sheldon Cotterell, who hit Benn
for a six and four on his way to 15 not out, will resume batting when
play resumes at 10:00 this morning.

"We would have
loved to be in a better position, but considering they were 154 for one
at one stage, I think we fought back well, and the plan is to come
tomorrow and try and wrap up the tail. Then when we bat put our best
foot forward and make a game out of the match," Barbados captain Shamarh
Brooks said.

Barbados, gunning for their 21st lien on
the title, and Jamaica, seeking their 12th, are current joint holders
of the record of four consecutive tournament
wins.