Jamaicans likely to stay with clubs 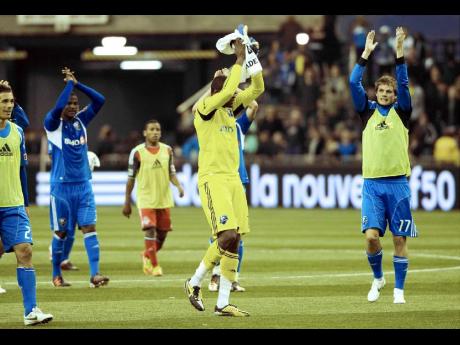 Players from the Montreal Impact, including Jamaicans Donovan Ricketts (second right) and Shavar Thomas (left), acknowledge their supporters after beating Toronto FC in an MLS soccer game in Montreal on Saturday, April 7. - AP

Jamaican players are likely to stay put with their current clubs going into this weekend's Major League Soccer (MLS) action, even as the transfer deadline for North America's top professional football competition looms.

Bringing players to MLS from outside the continent could still force Jamaicans to switch clubs by tomorrow's deadline, but most are cementing key roles early in 2012.

Defender Shavar Thomas and goalkeeper Donovan Ricketts, starters last weekend in Montreal Impact's only win of the season against Toronto F.C. (TFC), are at F.C. Dallas today. Thomas did not have a role in Montreal's first four games - three losses and a draw, conceding 10 goals - but has played all of the last two - a loss and win, when Montreal gave up a goal in each game. Ricketts has played every minute so far for Montreal, now eighth in the 10-team Eastern Conference (EC).

Also today, striker Ryan Johnson will try to get TFC their first MLS point at home against Chivas USA. Johnson has one goal in TFC's four losses.

Chivas, coached by Jamaica-born, former United States inter-national defender Robin Fraser, have not conceded more than one goal in any game - two wins and three losses. Their 2-1 win over Portland Timbers last weekend featured two assists from England-born midfielder Ryan Smith, who is eligible to play for Jamaica.

Portland, with national utility player Lovel Palmer playing all five games, are on a three-game losing streak and eighth in the nine-team Western Conference (WC). They are ahead of defending champion Los Angeles Galaxy, today's opponents, away from home.

Fullback Shaun Francis has played all four games so far for Columbus Crew, who were beaten 4-1 by New York Red Bulls last weekend and sit mid-table in the EC. Today, they play at Philadelphia Union and the Jamaica international is confident Columbus will rebound.

"We just have to come out and start aggressive," Francis told Crew.com.

Rampaging Red Bulls lead MLS in scoring and are second in the EC, but Reggae Boy Dane Richards' offensive drought continues. The midfielder has no goals or assists after five games - three wins and two losses.

Today, Richards faces San José Earthquakes, with four wins in five games for second in the WC. National midfielder Khari Stephenson and England-born forward Simon Dawkins, who also has Jamaican roots, have made regular appearances for San José so far.

Colorado Rapids will look to bounce back after losing 2-0 last week to Real Salt Lake. RSL shut out national striker Omar Cummings, scorer in each of the two previous games for Colorado, who slipped to third in the WC with three wins and two losses.

Tomorrow, JeVaughn Watson and Jermaine Taylor return to MLS action with the Houston Dynamo at Chicago Fire. The two have helped Houston to two wins in three games this season, third in the EC. However, the club has not played in MLS since March 23, although Taylor appeared in a reserve game on April 10.