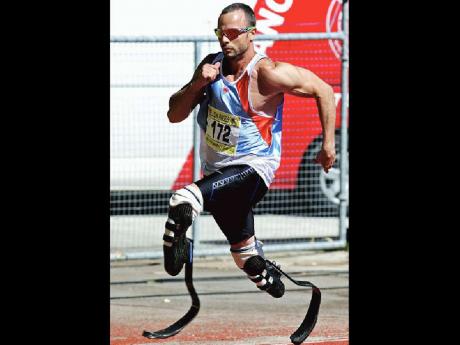 Oscar Pistorius advanced to the 400-meter final at the South African championships yesterday, attempting to become the first amputee athlete to run in the Olympics.

The double-amputee runner and Olympic hopeful smiled after the race, knowing he has a shot at winning South Africa's national 400-metre title today.

Pistorius cruised through the last 100m, looking to his left and right and appeared content to finish fourth in 47.91 seconds. He earlier clocked 48.24 in windy conditions in the heats at the NMMU Stadium.

"As long as you get through in the semi,'' Pistorius said. "There are a few guys here who are quite quick so I need all my energy (for the final). I slacked off quite hard at the end.''

The 25-year-old Pistorius needed to race here to be eligible for selection for the London Olympics.

He only needs one final step - another Olympic qualifying time of 45.30 at an international meet - to make history as the first amputee runner at the games.

"South Africa's federation wants us to do one more time overseas, which is fine by me because I run better at bigger races anyway,'' he said.

Former world champion Caster Semenya will compete in the 800 final at the university stadium. The 21-year-old Semenya will run in her second two-lap race of the Olympic year under new coach Maria Mutola.

Last month, she ran 2:03.60. Semenya needs to run another 1:59.90 time to qualify for her first Olympics. Her time at the world championships last year in Daegu, South Korea, also counts toward Olympic qualifying.

She has at least two more meets in South Africa after the nationals and a number of European events to ensure she's eligible for selection.

Flirting with the idea

Pistorius began his season with a run of 45.20 in Pretoria, giving him his first qualifying time of the season. Is he thinking about London yet?

"I'm flirting a little bit with the idea,'' Pistorius told The Associated Press while trackside. ''The team still has to get selected. My job is just to work hard until then and prove I'm in the right condition to be quite a strong 400-metre athlete if I get called up.''

Mokoena, South Africa's only medallist at the Beijing Olympics, finished second to Zarck Visser in the long jump final.