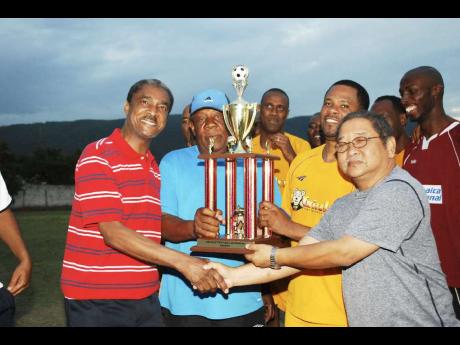 Several teams, including lucky New Green, will make a last-ditch effort to win two available semi-final spots as the preliminary round draws to a close this weekend in the South Central Confed Super League football competition.

Rivoli from Zone A and Meadows from Zone B have already booked their places.

Last week, a third St Catherine team, Royal Lakes, was deemed to have booked a semi-final spot after reaching 25 points with a crucial 1-0 win over parish mates De La Vega City. However, the competition's committee overturned a 0-0 result between New Green and De La Vega after news surfaced that the latter had used two ineligible players. Those two points resuscitated New Green's chance of a semi-final spot.

However, the Manchester team did themselves a huge favour on the field of play, when they recorded a 3-0 win over Bodles last weekend. They are now on 23 points and, with the points expected to be credited before tomorrow, they can earn a first-ever semi-final spot at this level with a draw against Royal Lakes.

Royal Lakes will need to win at Brooks Park to deny New Green, but the outlook would have been much better had they not hurt themselves by losing to Rivoli (0-2), last weekend. The win extended Rivoli's lead to 15 points.

The second semi-final spot is available from Zone B, where Meadows have already qualified. The two teams with the best chance - Newland with 23 points and Super Action on 22 - will battle it out in Santa Cruz at St Elizabeth Technical High School (STETHS).

Newlands defeated Naggo Head 2-1 last weekend, while Super Action won their fifth match at STETHS by defeating Downs on an 84th-minute strike by André Mitchell. A draw will be good enough for Newland, but the home fans will pray for a sixth win which will take them into the semi-finals.

There is still no takers for the fourth semi-final spot in the Captain's Bakery & Grill-sponsored Manchester Major League football competition.

Porus, a safe bet for the semi-finals, stalled Comfort with a 1-0 win in a rescheduled game on Wednesday. Despite the loss, Comfort hold a five-point advantage over Villa United. Hillstars, who are a point behind, have a game in hand. This means Comfort cannot afford to lose to Cobbla Gully Strikers at Kirkvine tomorrow.

Hillstars, who struggled for the first half of the league, continued their recovery by spanking neighbours Cobbla Gully Strikers 0-4 in a mid-week fixture.

Mile Gully hold the lead on 31 points and will host Villa United with the hope of maintaining the chance to play the fourth-rank semi-finalist.

Four Paths are likely to take the lead later today as they are scheduled to host Longwood, who are second from the bottom of the standings.

Jamalco's slip-up at the hands of York Town follows a similar fate by New Bowens, who lost 2-0. New Bowens seemingly have lost form and focus after going down in another surprise 2-0 defeat - this time at the hands of sixth-place Original Hazard.

Jamalco and Four Paths (33 pts), as well as New Bowens (31), are the only teams with a chance of landing the league title, which automatically provides promotion to the South Central Confederation Super League. Fourth-place Woodhall (22 pts) are too far back to make a challenge, with just four rounds to go.

With two rounds to complete in the preliminary stage of the J. Wray & Nephew-sponsored St Elizabeth Major League, mid-season champions Black River and Appleton remain the only qualifiers to the semi-finals.

No matches will be played this weekend as the league has been suspended to facilitate the payment of all outstanding referee fees.

Rivoli United's dominance of the senior South Central Confederation Super League has been similarly replicated in the junior Under-20 league.

After four rounds, Rivoli remain unbeaten after carving out 10 points. A season-opening 7-0 onslaught against Monymusk has been followed with a 2-0 win over New Green, a 0-0 draw against Bodles and last weekend's 3-0 win against Royal Lakes. Their Under-20 win was a precursor to their 2-0 win at the senior level against Royal Lakes.

New Green and Royal Lakes are in joint second place on six points.

Leaders Fort International (60 points) will look to continue their impressive march to the title as they meet seventh-place Eradication (46) in an Impulse-sponsored Portmore/St Catherine Domino League match at Fort's home ground, located along Passagefort Drive, tomorrow.

Fort are safely through to the quarter-finals and will look to consolidate their position. Meanwhile, Eradication are desperate for a win to thwart Passagefort United. In other games, Colours Sports Bar (43) have a tough assignment against fourth-place Island Special Constabulary Force (ISCF) at Port Henderson Road; Passagefort United are practically into the second round as they have bottom-club Garveymeade at the Garveymeade Sports Club; Correctional Services host Ken's Wildflower at the Prison Oval; third-place Ackee Pod (53) face Westchester Nuckuz at home; Spring Village are also at home and welcome Masterpiece in Spring Village; and Seamaster are at home against Black Rooster. All games begin at 11:30 a.m.

Old Harbour New Testament are still celebrating their first hold on the Dr Delford Davis Trophy for Excellence as they dethroned Power of Faith International (PFM Int) by 10 runs in the final of the Power of Faith Ministries Twenty20 Church Cricket League, at the Bridgeport sports ground last Saturday.

Old Harbour batted first and threatened to make a big score as after 12 overs, they were 89 without loss. But their batting collapsed after the two openers were out and they were restricted to 131-9 off their allotted 20 overs. André Henry top-scored with 59, while Henry's opening partner, Devoy Smith, chipped in with 33. Junior Stewart (4-15) and Terrence Francis (4-34) shared eight wickets for PFM Int.

In reply, PFM were bowled out for 121, two balls inside the final over. Mikhail Francis made 24, the dependable Junior Stewart went for 21 and Peter Harrison hit 20. Bowling for Old Harbour, Dwayne Pusey snatched 3-11 and Andre Henry followed up his good batting by taking 3-18.

Fraszier's deadly strike pair of Alton Brown and Olanzo Brown scored in the 37th and 67th minutes to hand their team the ascendancy. In the other semi-final, played at the same venue, it is all square as Rodwood came from behind to salvage a 1-1 draw with DB Basovak. André Simmonds gave DB Basovak a rasping start to the second half as he scored seven minutes after the interval. However, Dale Dixon equalised for Rodwood in the 76th minute.

Hellshire United and Westchester earned the right to meet in the final of the LIME Portmore Division Two football league, following semi-final aggregate wins on Sunday.

Hellshire were held 1-1 by East Portmore Portals in their second-leg semi-final and advanced 2-1 on aggregate. Westchester, which for over a decade have been in the wilderness, came back with a bang. They won the mid-season final and will be looking to cap off a fine season by taking the league title. Lousheng Davis scored on Sunday as they drew 1-1 with Westport, whose Andrew Richards netted. Westchester advanced to the final 3-1 on aggregate. The date of the final is to be announced shortly.

Garveymeade FC, an unlikely finalist in the Colin Fagan-sponsored knockout football competition, will hope that their luck continue as they play a formidable Hellshire United tomorrow at the Passagefort field, starting at 3 p.m.

Garveymeade's road to the final was a charmed one. They didn't kick a ball to reach the semi-finals as their first-round opponents, Daytona, failed to show for a mandatory uniform parade and were disqualified from the competition. Garveymeade, a team that ended the league at the bottom of the tables, then shocked Westport 4-1 on penalties after both teams were locked 0-0 after regulation and extra-time.

In the early games of the triple-header, Constant Spring Under 17 beat their Santos counterparts 3-2, but Santos turned the tables with a 1-0 victory in the clash of the Super League teams.

The trophy is in honour of former national goalkeeper, Orville 'Tutus' Edwards, who died from kidney failure at the age of 53 in August 2005. Edwards was Jamaica's and one of the Caribbean's finest keepers during the 1970s and '80s. He was a member of the victorious Vere Technical High School team that won the daCosta Cup and Olivier Shield in 1968, 1969 and 1970, and also a member of Santos Football Club at the National Premier League, KSAFA Major League and Master's League levels, which ruled local football from 1973 to 1980.