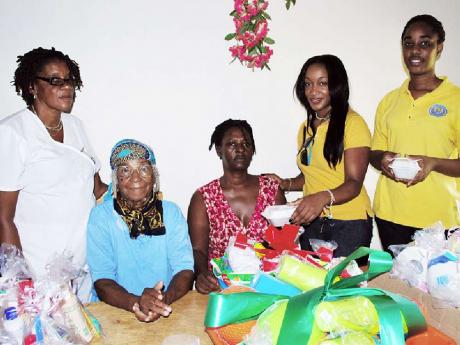 Teachers of Belmont Academy in Westmoreland were at the Savanna-la-Mar Infirmary last week where they handed out care packages to residents.

"We want to make this an annual event, and in addition, take care of an urgent need such as a washing machine, or anything else that is needed," commented Alreta Shearer-Sonlin, faculty welfare coordinator at Belmont Academy.

"We are the first centre of excellence in Jamaica, and we want to portray excellence in everything we do, and as teachers, we wanted to do community outreach. We decided to do the infirmary ... (as) in most cases they don't have anybody like close relatives visiting them."

She said that the treat cost the teachers $70,000, which they saved as a team over time.

The handover was not the school's first visit to the infirmary. On previous occasions, the residents were groomed by the upper-school students while the lower-school boys visited the Clifton Boys' Home in Darliston.

Belmont Academy was opened in September of 2009 and accommodates 500 students and 36 faculty members.

Savanna-la-Mar Infirmary's Nurse Angella Gayle-Roye was pleased with the gesture and said the packages would do a lot to offset some of the expenses.

"It is not easy to feed so many persons on a daily basis, so whatever we receive from friends of this institute, we appreciate," said Gayle-Roye.

The infirmary, which is managed and financed by the Westmoreland Parish Council, houses 34 females and 48 males, who are cared for by eight ward assistants, a matron, a laundress, a cook, a janitor, and two cleaners.