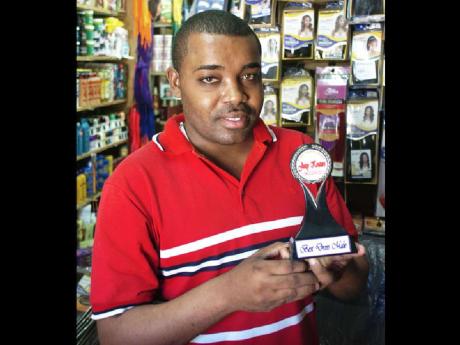 Ted 'Mr Universe' Brown at his cosmetics store in Savanna-la-Mar, Westmoreland, holding his 2010 award for the Best-Dressed Male in Westmoreland. - Photo by Christopher Thomas

The name 'Mr Universe' is well known throughout Jamaica, but for Ted Brown of Westmoreland, this title, by which he is popularly known, did not become popular overnight.

While seated inside his beauty supplies and cosmetics store in Savanna-la-Mar, the 30-year-old, despite his well-known stature, is very humble.

"I've been going to several competitions. I've won the Best-Dressed Award for my parish 10 years in a row, and from that, people always feature me for fashion shows, and I'll go there to do master of ceremonies duties now and then," Brown said.

Born on September 24, 1982, in Three Miles River, Westmoreland, Brown is one of 12 children for parents Owen Brown and Pauline Williams. He attended the Three Miles River Early Childhood Institution and the George's Plain Primary School, and graduated from Grange Hill High School in 2000.

"From I was growing up, I was very 'nuff'. I never sat at the back of the class; I was always at the front. And I always was in tune with what the teacher was saying. I have certificates to show that I was one of the best-attending students at Grange Hill. When they had awards ceremonies, I always got certificates for never being absent and never being late."

Move from hotel to small business

After high school, Brown went to work in the hotel industry, starting at Hedonism II in Negril, then at the Grand Lido Hotel and Couples Negril in 2001.

"My mom opened a store and stopped me from working in the hotel industry. Then we branched off to operate in beauty supplies, and I worked with my mom all these years till I decided to branch off on my own in 2005," he said.

Since that time, he has gone on to meet several popular Jamaican entertainers and media celebrities and counts several among them as his close friends.

"Don't feel like Mr Universe dresses up every day. I will go in the street and sell because my money is my money," he stressed.

"When I am at my business place, I don't dress up because I don't need to. I don't wear jewels and those things at my workplace. When I'm at work, I just dress like everybody else."