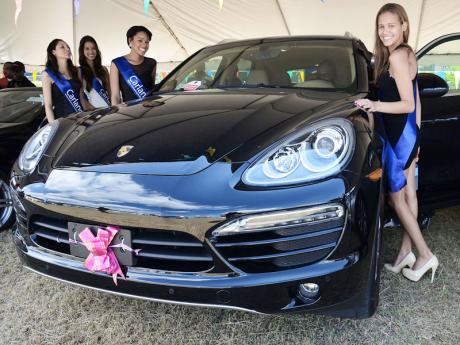 Ian Lyn of CarMax Jamaica Ltd is on a roll with his islandwide series of used car shows. After restarting the open-air, free shows by second-hand car dealers in January at the Police Officers' Club in St Andrew, today Mandeville gets its share of the used-car action at the Manchester Shopping Centre. And he says that the April 28th show at the popular 'Dump-up Beach' is the really big one, to complete an islandwide trek within about 14 weeks.

Today's show will feature about 60 cars from D&M Auto Zone, F&R Motor Sales, JD's Car Mart, K&B Motor Sales, Street Image Auto Zone, RPM Auto Mall and CarMax, Lyn sticking to the formula of having local dealers dominate the events. And while there is a different set of dealers for each county the Jamaica Motor Show 2012 series rolls into, Lyn is emphatic in his endorsement of the mainly Japanese vehicles they stock.

He is sure that the Japanese Domestic Market (JDM) vehicles, made by Japanese specifically for their own people, are the best that the country has to offer and are optimum for the Jamaican market.

"My belief is totally in the Japanese market. Japanese domestic cars are the best. They make the best for their citizens," Lyn said, noting that Japan generally has a highly disciplined, intelligent population which requires a high-level product. And, as they are encouraged to keep vehicles for only a year or two, the exports are generally high quality, Japanese used vehicles are rated tier one (like a brand new vehicle), tier two (slight smudging and soiling) and tier three (slightly damaged).

"When you check out the value for money, it makes no sense you buy new," Lyn said.

He also puts Jamaica's Japanese Domestic Market imports in the context of what people do with the second-hand vehicles they can afford. "The cheapest used car you can buy straight out of Japan is a Toyota Passo or Honda Fit," Lyn said, giving an approximate price of $700,000, to which dealers would add their mark-up before presenting the public with a final price.

With the Japanese Domestic Market used-car affordability, Lyn said, people are able to buy cars to put to productive purposes - not only the ubiquitous taxi, but he also gave the example of a lady buying a Toyota Townace and starting a cleaning service which now employs a number of people.

Automotives asked Lyn about issues related to availability of parts and he named two car parts dealers in particular as having "more parts in stock than any used car dealer in Jamaica". Plus, there is always the option of importing parts from the USA (one week) or directly from Japan (two weeks). Availability issues only arise, Lyn said, "when someone brings in a specific vehicle - and not many people do it that much anymore".

Climatically, while Japan is certainly not tropical, Lyn said he has not heard of any problems with domestic-model vehicles related to the climactic conditions. He pointed out that over a decade ago there were concerns about a carcinogenic component in the air-conditioning systems of some JDM cars, but those days are long past.

At the January show, the Porsche Cayenne was made the centerpiece, making a showpiece debut. In MoBay, the turbo version of the same SUV and Range Rover Evoque coupe will be the main display attractions. "We are doing it region by region," Lyn said, noting that financiers RBC, Churches Credit Union and perennial partner Scotiabank will be on hand in Mandeville today.

While making it clear that he holds no grudge with the new-car dealers sector - of which he used to be a part and fell short of a director's posting in voting - Lyn made no bones about being ultra-competitive. He noted that the used car shows started in 2009 after the scheduled new car display did not take place.

Now that the Automobile Dealers Association has returned with its show, in March, the used car shows are in an aggressive mode. The competition extends to legislation, with heated debates especially about the ages of the used cars which dealers are allowed to import.

It is a competition which Lyn does not shrink from, pointing out that while depreciation on a new car is about 25 per cent in the first year of ownership, it is seven per cent on a used car. While under 100 of those used cars will be on display in Mandeville today, Lyn expects about 250 in MoBay on April 28th, one dealer expected to carry in about 70 cars.