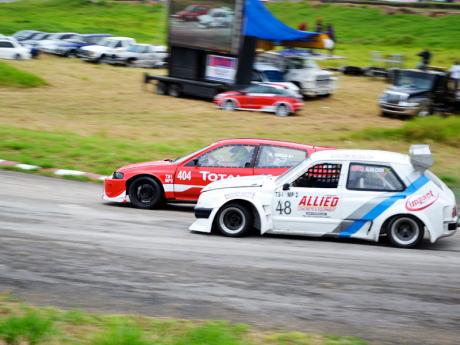 Alan Chen challenges Kyle Gregg for the lead during one of the exciting showdowns at the Dover Raceway on Easter Monday. 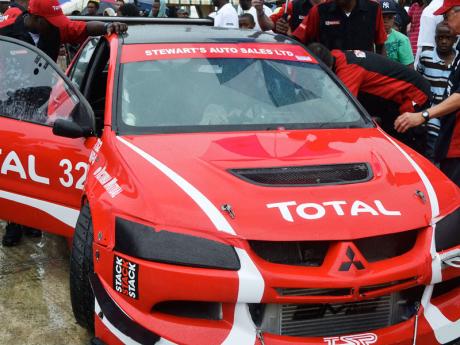 Members of David Summerbell's team ensure his Mitsubishi Evolution 8 is ready for the track.- photos by Errol Crosby/Freelance Photographer
1
2

At times, the electrifying atmosphere and loud cheers, mixed with friendly verbal clashes, brought back memories of tense battles between rival high schools at a Manning Cup game or 'Champs' in the 1980s.

However, the scene was Carnival of Speed at Dover Raceway, St Ann, where thousands of diehard motorsport fans braved the rain on Easter Monday to witness epic battles among the big guns of the respective classes.

The fans took their support to an even higher level than usual. During the pre-lunch period, each time the roaring engines of Doug Gore's Audi TT and David Summerbell's Mitsubishi Evolution 8 sounded off at starting grid, the popular 'gully side' section of the huge crowd, which was divided in its loyalties, erupted in competing cheers of "Audi" and "Evo". The verbal battles continued until the start of the race.

It was Gore who drew first blood. As the starter waved the green flag in the MP 4 event, Summerbell quickly assumed the lead in the wet and slippery condition, with Gore on his bumper.

However, as they negotiated the right-angle corner, Gore drew alongside Summerbell and accelerated, then took the lead, resulting in a thunderous roar from the crowd. Gore went on to lead to the finish, with Summerbell in second place.

Responding to the sweet victory in the wet and slippery condition, the Montegonian boasted that he has not lost a race at Dover for several years now.

"I am very confident when competing in the rain at Dover and it shows in my driving. David (Summerbell) touted that he was coming to break the track record, but on the weekend it was I who had the fastest lap time. What that tells you?" Gore told Automotives later in the week.

In their second clash of the day, Summerbell took charge from early and made no mistake. Gore's car developed mechanical problems. "During the race, a bolt on the control arm of the vehicle broke," explained Gore later.

Summerbell also addressed the weather conditions. "Our set-up for the rain was not good. He (Gore) was much faster on the wet. But as the track got dry later, we reversed the situation," Summerbell said.

In another dramatic showdown, Kyle Gregg and Alan Chen had the fans screaming. Chen sent the message that any day he is able secure a good sponsor, will be the day he is crowned king of the track.

Though he had some challenges, Peter 'Zoom Zoom' Rae made his presence felt with his RX7 Mazda, like Chris Campbell, whose BMW almost rolled in one of the events.

The day's excitement was punctuated by a number of spills and thrills, which saw the emergency vehicles rushing on to the track several times. In response to the police's security concerns, the Dover perimeter fencing has been vastly improved, and additional security personnel was brought in to manage the heavy traffic after the race meet.