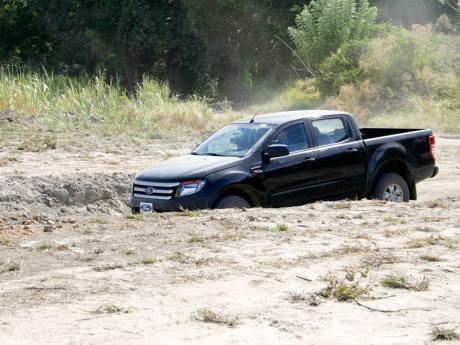 The 2012 Ford Ranger shows its mettle in muddy conditions. 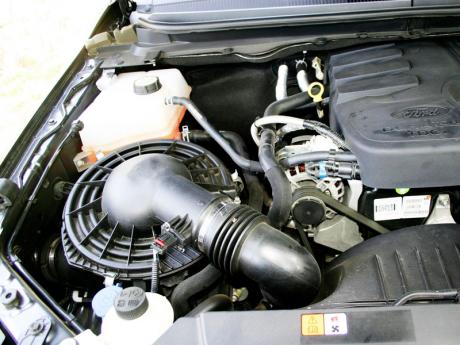 The alternator's placement allows the 2012 Ford Ranger to go through high levels of water safely.- photos by Christopher Serju 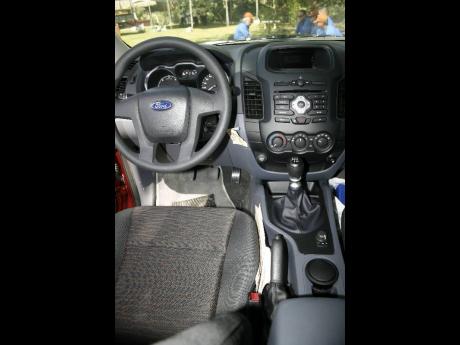 Watching the promotional video for the 2012 Ford Ranger pickup, I was impressed. As it crept through 800 millimetres of water everyone watching the video held their breath. It was as if we were in the vehicle, hoping against hope that it would make it; when it got across the river we all seemed to breathe a collective sigh of relief.

Afterwards, as the pickup made it up a steep mountain path the narrator offered this simple advice - put the vehicle in low second gear, take your foot off the accelerator and let the vehicle idle all the way up. Watching the vehicle with a 2.2-litre engine steadily make the 523-metre climb to up to 2,873 metres above sea level without the driver touching the gas pedal was awesome - that was some serious raw, low-down torque.

However, if seeing is believing then actually testing the vehicle for myself was scary and exhilarating. I was among a group of journalists invited to test drive the 2012 Ford Ranger in Panama, where an obstacle course was set up on a cattle ranch to simulate some of the conditions under which the vehicle had been tested.

Sitting in the back seat while someone else drives is far different from when you are actually in the driver's seat going over the same route. Approaching the descent to a river bed the instructor somehow sensed I was going to press the brake and offered this simple instruction "let the vehicle do its work". Acting against my instinct, I heeded his words and was impressed as the pickup gently eased down the incline. Then (again under instruction) I gently caressed the gas pedal and felt it respond, rising up and out of the river bed.

So now I was beginning to better understand the claims and instructions in the promotional video and pressed along with much more confidence. However, the next obstacle would test my sanity. Again, following instructions, I eased off the accelerator as we approached the 45-degree angle and the Ranger started its climb. "Let the vehicle work," I heard the instructor say. How I kept calm I still don't know, but as the right-side wheels went up and the driver's side seat (in a left-hand drive vehicle) seemed to fall away, I think it was the absurdity of the next words (in such a situation) from the instructor that kept me from total panic.

"If you were outside you would see that at least two wheels are probably in the air (off the ground)," he said. Well, if he was trying to boost my confidence this was exactly not the way to go about doing so. Still, I kept my calm, found my voice and managed to evoke an aura of confidence and competence as I breezed through a set of logs placed across the road, went through another section of the river ... and then the hill.

A section of the roadway had been dug out, leading to the makeshift hill, so the vehicle entered at a lower level than the preceding roadway. This time I heard the instructor's voice in my head - "let the vehicle work". Everything was going well until we neared the crest of the slope and I found myself staring at the sky; there was no road to be seen ahead. Of course instinct took over and as I kept the wheel steady, my new best friend kept up her end of the bargain by taking us up and over and down when I gently, ever so gently, tapped the brake as we descended.

Strangely enough I found myself on a staggering high at the end of the ride, which I think had everything to do with the fact that I was now thoroughly convinced that the latest Ford Ranger had taken off-road-driving performance beyond anything its competitors can offer. Exuding power and confidence in a styling the designers call '21st Century Tough', the taut and muscular Ranger is equally at home on a construction site or outside an upmarket restaurant. Its front end features a short overhang with the signature three-bar grille, a global Ford truck design cue.

A feature that will definitely go over well with Jamaicans is that the alternator has been raised much higher and, in combination with a 'breather' hole in the air filter, will definitely give the Ranger an edge during the rainy season.

Poised to be a leader in innovation, the new Ranger comes with smart technologies that make the pickup easier, safer and more fun to drive. On selected models with Bluetooth 1, USB and iPod 2 connectivity, there is voice control over the radio, CD, iPod, USB, electronic air conditioning and mobile phone. Dual-zone climate control and cruise control are available on the high-end series while selected models offer a five-inch color screen with satellite navigation.

The all-new Ford Ranger powertrains have been engineered to give customers a superior combination of power and torque at class-leading fuel efficiency. Three new engines are available to suit every purpose and pocket.

Leading the way is Ranger's new 3.2 litre five-cylinder diesel engine. With a flat torque curve giving higher levels of torque over a broad rpm range, the Ranger is able to pull full loads on the highway easily without requiring a gear change. Ninety per cent of its peak 470-Nm torque is available from 1,700 to 3,500 rpm, providing better engine flexibility. The fuel consumption of the 3.2-litre engine in a combined cycle is ranging from 10.0 L/100 km on a 4x4 manual transmission variant to 10.6 L/100 km on a full-option 4x4 model with automatic transmission.

For those who prefer an engine with a smaller displacement, the 2.2-litre four-cylinder diesel engine delivers peak torque output of 375 Nm and power output of 110 kW (150 PS) by utilising variable geometry turbochargers that allow more accurate control of boost pressure over a wider operating range. This enables lower-end torque capability for improved launch and drivability, while making the engine fuel efficient. When fitted to a 4x2 model, the 2.2-litre engine consumes as little as 8.3 L/100 km in a combined cycle.

For the first time, selected Ranger diesel models will be available with either a six-speed manual or six-speed automatic transmission to provide reduced engine rpm and improve its mileage on long highway trips or in city traffic.