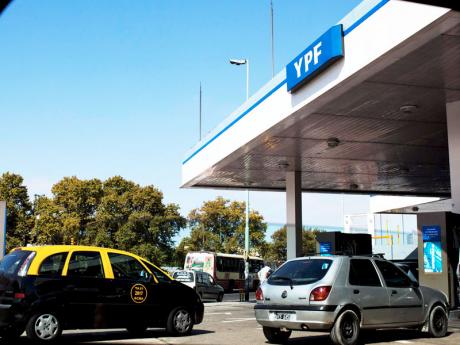 People fill the tanks of their vehicules at an YPF station in Buenos Aires, Argentina, Thursday, April 12. - see full caption at the end of story.

Spanish officials warned Argentina last Friday that the country risks becoming "an international pariah" if it follows through on its threats to wrest control of Spanish-owned energy company Repsol's majority stake in its South American YPF unit.

"Breaking the rules comes with a cost, and Argentina could turn itself into an international pariah," said Inigo Mendez de Vigo, Spain's Secretary of State for European Affairs, in an interview aired on the Onda Cero radio network.

Garcia-Margallo said after the hour-long meeting with Bettini that he hopes dialogue can resolve matters, but that any "attack" on Repsol would be considered "an assault on the Spanish government."

Shares of Repsol YPF SA closed down 2.7 per cent to euro17.47 (US$22.97) in Madrid amid the escalating dispute and a widespread sell-off for Spain's benchmark Ibex index - even though Repsol told Spanish security regulators that Argentina had yet to provide any official word of its plans for YPF.

Speculation about a possible renationalisation of the formerly state-owned company had driven shares in YPF up sharply last Thursday.

Those shares fell Friday with the lack of an announcement.

Most YPF shares are traded in New York, where they dropped five per cent in early trading, continuing a 35 per cent slide since Argentine leaders began pressuring the company in January.

Governors of oil-producing Argentine provinces have withdrawn about 15 oil leases, representing 18 per cent of YPF's crude production, alleging the company failed to keep its promises to develop them. YPF countered that it had invested millions in those areas and plans to increase production, but Argentine officials have said that still falls short.

How Argentina may try to displace Repsol, which owns 57 percent of YPF, has been the subject of wide speculation since the government's pressure campaign began in February.

Even with its share prices depressed, YPF is valued at US$13.6 billion, and buying half of that would deplete Argentina's treasury of funds it needs to maintain the populist subsidies that have kept the country's economy humming.

Expectations rose sharply last week when Jorge Sapag, governor of oil-producing Neuquen province, told reporters that "what's coming is a mixed (public-private) company" whose board would include representatives from Argentina's provinces.

A proposed law then circulated among Argentine lawmakers Thursday, declaring 50.01 per cent of YPF shares "a public good" subject to government expropriation. The proposal wasn't formally submitted to Congress, nor was there any announcement from President Cristina Fernandez following her meeting with a governors group.

Suspense in the air

Fernandez was flying Friday afternoon to a regional summit in Colombia, leaving nearly everyone involved in suspense about Argentina's next move.

Her only public comments came in an unrelated national address Thursday night, when without mentioning Repsol-YPF by name, she said she was "ready to pay all the prices that must be paid" to keep Argentina growing.

"These measures aren't advertised, they're simply adopted," she said.

Repsol President Antonio Brufau was still in Argentina's capital Friday morning, but a company spokesman said he had no information on Brufau's agenda.

The European Union has taken Spain's side.

Olivier Bailly, a spokesman for the EU's executive, told reporters the commission hopes Argentina shows respect for "international engagements on the treatment and the protection of international investments on its territory."

"We stand side-by-side with Spain in this situation," he said, adding that the two countries must forge a solution that does not "damage the working environment and economic relations between the European Union and Argentina."

People fill the tanks of their vehicules at an YPF station in Buenos Aires, Argentina, Thursday, April 12. Spanish Industry Minister José Manuel Soria has warned that the government will interpret any "hostile gestures" against Spanish companies abroad as an act of aggression, in an apparent reference to a conflict with Argentina over an oil company controlled by Spain's Repsol. YPF, which is 57 per cent owned by Repsol, has rejected Argentine government pressure to plough some of its profits back into the South American country. - Ap