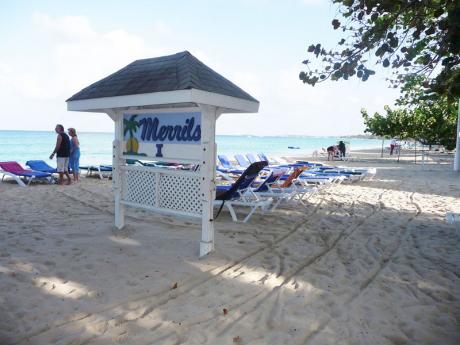 A view of the beach at Merrils Beach Resort in Negril.

It was scarcely surprising to hear that when Caribbean foreign ministers met in January with their British counterpart, the most divisive issue was the UK's discriminatory tax on travel, the air passenger duty.

According to those present, far more revealing was the extent to which Caribbean foreign ministers spoke in this context with knowledge and conviction about the central importance of tourism to regional growth and development.

It demonstrated that the vital importance of tourism as an industry had been understood.

It suggested too that ministers, if well briefed, were prepared to deploy arguments in defence of the industry in much the same way as they had in the 1990s when the region fought European plans to bring to an end preferences for sugar, bananas, rice and rum.

Although the conviction about tourism's central economic importance has yet fully to take hold across the region, 2012 ought to be the year when this happens.

What is required, if the industry is to flourish in a globally competitive environment, is for these occasions to be used to not only preach to the converted but also to broaden understanding about how tourism relates to growth, employment, development, the environment and regional competitiveness.

One of the biggest problems that faces the industry - despite its size and wealth - is the absence of hard information indicating just how significant a role it plays in national economies. The consequence of this has been that up to now the industry has been speaking largely bereft of the ammunition with which to convince policymakers.

Helpfully, in this respect, evidence is now becoming available.

In March, a study titled 'Tourism as a Driver of Jamaica's Eco-nomic Development' was published. Commissioned by the Jamaica Hotel and Tourist Association from Oxford Eco-nomics and using newly developed primary data from the industry plus national statistics, it indicates the central importance of the industry to Jamaica and its future growth.

Produced independently, but used to support the Jamaican industry's lobby against the removal of tax waivers, it provides new insights into just how important the industry has become.

According to the study, tourism has become the core driver of the Jamaican economy. It suggests that in Jamaica, tourism contributes 19.5 per cent of GDP, generates one in four of all jobs and is the leading export industry.

Strikingly, it also suggests that nearly three-quarters of Jamaica's US$2.64 billion (J$229 billion) annual earnings from tourism remain within the country. This contrasts with academic studies containing estimates relied on by international institutions, which suggest that between 60 to 80 per cent of tourism earnings leave the country.

By including indirect and induced value of tourism to the economy, Oxford Economics took what many believe to be a more realistic approach than the direct accounting model of the tourism sector used by the Jamaican and other governments. So by its measure, Oxford Economics' estimate that 19.5 per cent of the Jamaica's gross output results from tourism while Government suggests the figure is 7.3 per cent.

The research body indicated that of the 71 per cent of expenditure that remained within the island, 33 per cent related to payment of local salaries and value-added services; 38 per cent to local purchases minus imported components; and leakages accounted for the remaining 29 per cent.

The study also suggests that in Jamaica, tourism drives 15 per cent of all construction, 10 per cent of the finance and banking sector, 20 per cent of manufacturing and 21 per cent of utilities.

That this is significantly at odds with a recent World Bank study on Jamaica suggests that there is a need for detailed attention to be paid to comparing the report's findings and methodology with the approach taken by international institutions and academics whose figures, intentionally or otherwise, continue to feed anti-tourism sentiment by suggesting that the leakage rate of overseas earnings from Caribbean tourism is the highest in the world.

What this indicates also is that tourism requires a much more rigorous information-based approach to what is said. For too long, there has been a tendency to conflate personal and public views without recognising or exploring the hard reality of an industry that underwrites a significant part of Caribbean growth.

As CTO and CHTA prepare for their meetings, this is a challenge that both organisations need to rise to.

Since the start of the 21 century, the industry in the region has undergone structural change, the implications of which have not fully been acknowledged by governments or the industry.

The pricing policies of the externally owned hotel chains and cruise ships with large numbers of rooms are driving down the profitability of domestically owned smaller hotels; viral marketing, search engines and new media are changing marketing in ways that have turned every global destination and property into a competitor; taxes on visitors whether domestic or external are increasing at a rate that may place the Caribbean, especially for middle-income long haul travellers, back into the category of aspirational; Cuba's changing economic model will bring it fully back into the Caribbean market as a competitor; levels of service and cuisine are far from acceptable at many properties in relation to price; the largely unspoken issue of crime against tourists has yet to be addressed; the fastest growth in disposable income and travel in the next decade is likely to be in markets that the region is only slowly reaching out to; and there are continuing challenges relating to airlift, the environment, financing and leadership.

These are matters that touch the lives of the hundreds of thousands who now work in or are dependent on the tourism sector's success.

It would be good therefore to feel that this might be the year when all Caribbean political leaders, the public sector, academics and the broader community embraced the industry and debated how best to support its future development.