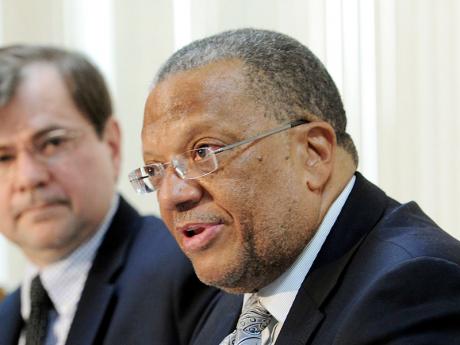 In the first 100 days, it is all over the streets: "A PNP time now!" The proclaimers don't just mean that the People's National Party (PNP) has swept both the general and local government elections and that Labourites should pack their bags and go, or that scarce benefits must flow in their direction now.

What a lot of people mean by "PNP time now!" - and this is ominous - is that they are free to do as they please, with no action expected from the State. I know of one roadside garage operator who was shut down and has reopened for business under the slogan. Street dance operators have been pumping up the decibels and the duration of events under the slogan. And some analysts are proposing, God forbid, that even criminals may have made that calculation.

It is hard to say where this idea may have come from that the PNP stands for slackness, disorder and lawless behaviour. But clearly the Government formed by the party must, in the second 100 days, move quickly and decisively to correct this dangerous misconception.

The PNP laid out 'Eighteen Steps to full People Empowerment' in its general election manifesto. Heading the list was negotiating a new agreement with the International Monetary Fund (IMF) "to be in place only for as long as necessary and on terms and conditions that will lead to both the social and economic development of our people". Nothing spectacular happened in the first two weeks, as we were led to expect by the party leader in the leadership debate. But the prime minister, from a narrow slate of possibilities, has appointed her best pick to head the tough Ministry of Finance.

Dr Peter Phillips has moved with commendable vigour to engage the IMF in an exchange of visits and in talks. The discussions have turned out to be just as secret and will, perhaps, end up being just as drawn out as those so severely criticised in the last administration. The delay of the presentation of the Budget from early April to May, with which I have no real problem, is partly to allow completion of an agreement with the IMF. Advancing tax reform, which has stimulated lively public and parliamentary debate, is another justifiable delaying factor.

Peter Phillips has quickly established himself as a solid minister of finance and planning with a solid grasp of the issues and the realities which enforce continuity with the programme of economic reforms shaped by the last administration. He has even bailed out his prime minister from a media-engineered debacle over remarks about Jamaica needing a Greek-style bailout, without a ripple in markets.

Phillips has tabled two Supplementary Estimates in the first 100 days, which may be more a sign of budgetary pragmatism in a very fluid situation inherited rather than a signal of confusion. One critical index of confidence is the relative stability of the Jamaican dollar.

Two manifesto promises which have held the public spotlight are the Jamaica Emergency Employment Programme (JEEP) and the removal of GCT on electricity. After a couple of false starts, JEEP made it on to the road within the first 100 days and is under the aggressively watchful eye of the Office of the Contractor General with questions of corrupt practices already arising.

STEM (Science, Technology Energy and Mining) Minister Phillip Paulwell has served notice as the Budget is being crafted that the Government intends to honour its commitment to removing the GCT on electricity. But that's the easy part. The minister who liberalised the telecommunications sector in the 1990s, against all the naysaying and a 25-year monopoly contract, says, in line with another manifesto commitment, he wants to drive down energy costs by as much as 60 per cent over four years through private sector-led fuel diversification and competition in the sector. Vigorous civic and business protest action over the high cost of electricity has gathered steam over the first 100 days.

The PNP promised local government reform among its 18 steps. The Government took the brisk initiative of calling the local government election, which had been postponed more than once by the last administration, within three months of taking office. The reform pledge was scaled up into a full manifesto.

The Government, through Minister Phillips, has been stubbornly sticking to the position of public-sector reform and containment of the public-sector wage bill (a key requirement of the IMF) without job loss. The public employees' unions are, therefore, to expect a continuation of salary freezes. Pension reform has remained alive and on the table.

Whatever else Government sets itself up to do, its universal core areas of business are citizens' security and public order, justice, and public infrastructure broadly defined. The PNP manifesto promised "to improve the security of our citizens" and to push for the proper administration of justice and to protect fundamental human rights.

The first 100 days saw a spike in murders which subsequently subsided in March. The vocal and visible minister of national security has put out a crime-reduction action plan, the centrepiece of which is to reduce murders from 62 per 100,000 to 12 by 2017. Public furore over the number of police shootings has erupted in the first 100 days.

Justice Minister Mark Golding has approached his responsibility with commendable vigour, but there isn't much to report by way of visible achievement in the first 100 days. He has pledged to reduce the backlog of cases in the system and to speed up trials. The police have to help with investigation, detection and apprehension and be resourced to do so.

Near the end of the first 100 days, Parliament received, debated and approved, as per convention, the widely consultative report of the Electoral Commission of Jamaica on campaign financing. Tax-reform proposals have recommended cushioning the poor from universal GCT by expanding the targeted social safety net. This coincides with the PNP manifesto pledge to strengthen the Programme of Advancement Through Health and Education.

With no clashes with the Jamaica Teachers' Association, Minister of Education Ronald Thwaites has been one of the more visible ministers. He has made it unequivocally clear that resources will be shifted to early childhood education, in line with a manifesto commitment. He plans to squeeze the high cost of remediation out of the system, revise the controversial Grade Six Achievement Test - consultants have already been hired - and strengthen technical-vocational education. Thwaites has gone around the country euphemistically relabelling 'failing' schools. The whole system is failing, and a change of label is not change of condition.

In the first 100 days, the Government has appointed a whole slew of public boards. The usual speculations about stacking boards with party faithful, especially as chairs, have arisen. The usual political changeover of some ambassadors has taken place within the first 100 days. There is no way of avoiding, in competitive democratic politics, rewarding the party faithful and Government wanting to have loyalists in strategic positions.

On the whole, it seems to me that the composition of boards, including chairs, reflects real talent, in addition to any other desirable 'qualifications'. What an increasingly aroused civil society should do is to aggressively monitor the performance of boards and the public agencies they manage.

In the first 100 days, Prime Minister Portia Simpson Miller has confidently gone off to the CARICOM Heads of Government Meeting and is today wrapping up with other hemispheric leaders at the OAS summit in Colombia. A memorable foreign affairs development has been Minister A.J. Nicholson's plea for a realignment of Jamaica's development status so as to qualify us for more aid!

While the Government has pledged to remove Her Majesty as head of the Jamaican State in this our 50th anniversary of Independence, her grandson and Diamond Jubilee ambassador, Prince Harry, engendered massive public adulation during his visit and brought great promotional benefits to Jamaica. The country had a good winter tourist season, continuing from the last administration, even while the sector tenaciously defended its waivers from being tax reformed away.

In agriculture, perhaps the brightest spot was the demonstration of seriousness by the new Chinese investors of making a success of the sugar estates which the last administration managed to privatise. The consultant's fee, quite unwarrantedly, became a media and political football in the first 100 days. The sector has been hit with a number of disease and pest problems.

The Riverton dump fire, burning across local government, environment, and health, exposed how weak elements of our public infrastructure are.

The cutback of the Budget for Jamaica 50 celebrations underscored the poverty of the Treasury and the failures of Independence. The new administration, perhaps 'distracted' by other things, has not yet really worked up any hype or punch for Jamaica 50.

All in all, the new Government has firmly established itself in structure and operations over the first 100 days in office. There has been no dramatic misstep, no erupting corruption scandal. In the nature of governance, much of its plodding business has been quietly executed outside the glare of the media spotlight. The country hangs together. The problems and constraints remain the same. The reform agenda remains the same. The policy decisions and matching budgetary allocations of the first full fiscal year will tell us a lot more about the intent of the Government than the carryover and carrying on of its first few months.

I am unaware of any big new investments coming into the country during the first 100 days. Jamaica Development Infrastructure Programme has been put on hold. There have been a couple of high-profile local developments, such as LASCO and Sandals having the PM break ground for expansion projects. And the Jamaica Public Service Company has announced big plans for a new generating plant. But this is where the real action is going to be, generating real wealth through real business.

Martin Henry is a communications specialist. Email feedback to columns@gleanerjm.com and medhen@gmail.com.