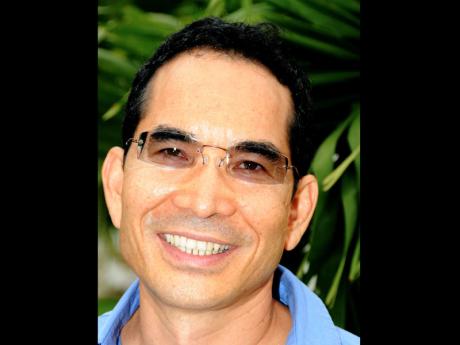 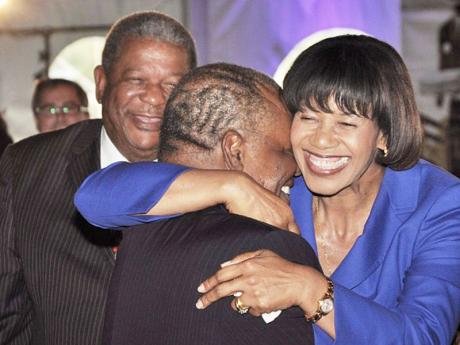 Prime Minister Portia Simpson Miller greets Hubert Ingraham, the Bahamian prime minister, while their Antigua and Barbuda counterpart, Baldwin Spencer, looks on. They were at the recent opening of the Sandals Corporate University.- FILE
1
2

The first 100 days of Portia Simpson Miller's second coming have not been overly impressive. Her debate promise to 'renegotiate the IMF deal, JDIP contract and JPS contract in a week or two' has been proven unrealistic. Cancelling the prime minister's question time and the prime ministerial phone-in show is a retrograde step for governmental transparency.

We know nothing more about Jamaica's IMF status than we did in December, and the unexplained postponement of the budget until May makes a mockery of promises to 'level with the people'.

The naked partisanship of recent local government ceremonies is quite disturbing. Moving the Kingston and St Andrew Corporation swearing-in ceremony without bipartisan approval, heckling outgoing mayors in Montego Bay and Portmore, the Sav-la-Mar mayor stating on TV his unwillingness to work with 'green men', the desecration of removing the green from the Jamaican flag - these cannot be good for the health of our democracy. If Mrs Simpson Miller's 'consultation and inclusiveness' election talk was sincere, she should condemn all this personally.

On the plus side, Portia continues to listen to the people, as evidenced by her intervention in the Chris Gayle-West Indies Cricket Board dispute, which probably gained her some extra votes in the local government elections.

All this, however, is minor stuff in the context of the looming economic crisis. The Simpson Miller administration will, ultimately, be judged on how it handles the dire financial straits confronting the nation.

There are no easy options - it's either bad or worse. Measures like the Jamaica Debt Exchange (JDX) swap, the Air Jamaica divestment, and the sugar divestment likely prevented Jamaica from being where Greece is now. But these were just the necessary first steps in an unavoidably painful journey to economic stability. If the other essential decisions are not made, the scenes from Greece seen on TV each night - strikes, riots, suicides - might in a year or two become Jamaican realities.

Luiz Inácio Lula da Silva, Brazil's first working-class president, used his political capital to push through needed but potentially divisive reforms. His pragmatic approach produced an economic boom that made him the most popular leader in his country's history. Barack Obama called Lula "the most popular politician on earth". Why should Portia not try to emulate him?

portia must strike while the iron is hot

She has a massive majority at all government levels and is faced with a weak and divided opposition. Jamaica Labour Party leader Holness has rediscovered his common touch and markedly improved his communication strategies since his "three questions only" election-night debacle. But while Prince Andrew remains personally popular, the JLP's arrogant and elitist reputation is still mud. Even if it reorganises and rebrands itself effectively - a rather big if - it's hard to see it getting back on even poll terms with the PNP any time soon.

So circumstances have granted Portia Simpson Miller a virtual blank slate on which to write her political destiny. Does she want to go down as just another populist politician who bartered her country's future for short-term votes? Or would she like posterity to laud her as a stateswoman with the fortitude to make the hard decisions that put her country on the road to sustained prosperity?

The entire country agrees that tax reform is necessary, and it's hard to imagine a more comprehensively thought-out programme than the Private Sector Organisation of Jamaica-led tax package, or one that manages to achieve the desired national goals in so relatively painless a manner. It is also very much in step with international taxation trends.

If properly communicated to the populace and implemented as recommended, it would immediately achieve three crucial things:

1) Redistribute - the rich would pay more and the poor would pay less.

2) Reduce corruption - by removing all GCT exemptions, it dramatically lessens the opportunities for 'bandooloo-ism'.

3) Spur entrepreneurship - by decreasing the direct tax on business, it would stimulate job creation and growth.

It's by no means perfect - nothing ever is. But it's very likely better than anything else we can come up with. To cherry-pick and cut and paste will mean spending months, and even years, coming up with solutions which will very likely be worse. Why not spend that potentially wasted time and energy on other critical needed measures, such as public-sector reform?

Were I in Portia Simpson Miller's position, I would gleefully champion this tax package. It would both gain her kudos in the overall business community for responsible governance and, at the same time, make the less fortunate better off. She can both silence her critics and gain more votes. What a win-win situation!

Many persons have illogically latched on to the removal of GCT exemptions on basic foods such as cornmeal, while ignoring the specific measures included that would more than compensate for such changes. So from both the political and commonsensical standpoints, the poverty-amelioration programmes should be rolled out before the tax changes are made. After all, you don't wait till you are on the tightrope to spread out the safety net below.

At the same time, the Programme of Advancement Through Health and Education (PATH) should be made more efficient and transparent. A good blueprint would be the Bolsa Família (family allowance) instituted in Brazil by Lula. This gives small monthly direct payments, preferentially to female heads of poor households, on the condition that they do the 'right things' such as sending children to school and getting them vaccinated. The extremely poor get an unconditional basic benefit.

There are no cash handouts, as allowances are disbursed through debit cards via a central authority that bypasses local politicians. Anyone officially under the poverty line can apply, with no political strings attached, and all names and amounts given are published on a website.

Transparency and accountability are crucial to its success.

Bolsa Família contributed greatly to steep declines in Brazil's poverty and inequality rates. A properly revamped PATH could do the same.

Some business sectors such as the hospitality and export industries have expressed concern about the tax-reform package. Well, in a crisis everyone has to shoulder his share of the burden. If those who can afford it do not make sacrifices for the common good, this country could easily fall into chaos.

What would happen to our visitor arrival count if BBC and CNN started showing angry riots in Ocho Rios, Negril and Montego Bay? Where would our manufacturers be if 'hungry-belly' demonstrators started burning down factories? Those who blithely scoff that 'it can't happen here' should remember again that it has happened in Greece, a far richer and more developed country than Jamaica.

The JDX had something like a 99 per cent compliance, which was unprecedented in international finance, and won the world's admiration. The Private Sector Working Group's reform package is, in essence, a kind of JDX 2, where the privileged are volunteering to give up part of their privileges to help secure a more stable, long-run future for the nation. Let's not imagine that those proposing it are saints. But they are patriotic Jamaicans who love their country and have enough intelligence to practise enlightened self-interest.

As someone who came, in her words, "from the bowels of the working class", but is married to a former business executive, Mrs Simpson Miller is uniquely placed to act as a bridge between the two Jamaicas and guide her nation to a shared prosperity.

So my message to Portia after her first 100 days would be: those to whom God gives great power should use it wisely.

Kevin O'Brien Chang is a businessman and author. Email feedback to columns@gleanerjm.com and Kobchang365@gmail.com