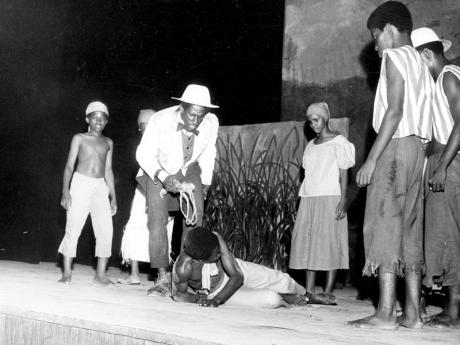 In this 1973 Gleaner photograph, Rufus (Nerril Webster), the overseer, uses his whip on slave Jason (Vincent Richards), while other slaves look on in the production, 'The Runaway', the St Andrew Technical Drama Society award-winning entry in Festival Drama and Speech Presentation, at the Little Theatre.- file

If you think my last column was irreverent, get out the stake and fire because you are going to condemn me for blasphemy. Some persons were even silly enough to conclude that because I stated the fact that the gospels were not eyewitness accounts, I was an atheist. Furthermore, since there was no proof that Christ was resurrected or that any of the incidents where Jesus didn't have his disciples with him took place, then I must be saying that they didn't.

If that is the case, they need to go back to their Bibles and read about the thing which is smaller than the mustard seed and even smaller than the section of the brain that is used: faith. In essence, the point is that Christians are supposed to have faith despite there not being any proof and not make issue over that fact that there is none. Faith and doubt are both based on lack of proof. The former is a choice Christians made.

Nonetheless, here is another inconvenient truth. Jesus' crucifixion was nothing special or exceptional in terms of human suffering and punishment. He was neither the first, 100th nor the last to be crucified by Romans. They used to pin people on plus signs long before the man who looked like Haile Selassie stepped forward and lost the election to Barabbas for his life. Indeed, the time he spent on the cross was rather short in total, around six hours of suffering.

Within the annals of history, millions have experienced far worse, more painful and cruel deaths than Jesus, and unlike him, did not have the luxury of the power of God in his fingertips to zap themselves off the cross or to turn their antagonists into wine, swine and snakes. Indeed, Jesus could have walked on the heads of the Roman soldiers and the water in the bowl used by Pontius Pilate to wash his hands. In the 1300s, English criminals were routinely hanged, drawn and quartered. This involved hanging the convict, oftentimes not a true criminal but a dissident. Condemned men were tied to a frame or wooden panel, and pulled along the ground by a horse (thus drawn) to the place where they were to be executed.

He was then hanged, but just short of death and then beaten, 'de-masculated', disembowelled, and then beheaded while suffering. He was then quartered, which literally means hacked into four pieces and his remains prominently displayed in strategic locations across the country. London Bridge was one such locale. Women were generally spared this treatment but only because the female body had to be kept hidden so as not to offend the sensitive public palate for decency.

Instead, they were burnt at the stake, especially if they were convicted of high treason. If found guilty of heresy or blasphemy, the crime which some religious bigots are waiting to pin on me, they were barbecued alive, screaming to the last breath. Most famous of these was the murder of Joan of Arc on trumped-up charges in the 1400s. Even Catholic priests were subject to the above fate during the Elizabethan era.

And the British were not alone in their cruelty. Vlad Dracul of Dracula infamy was known as the Impaler because he murdered tens of thousands of his enemies and those whom he simply wanted to terrorise, by sticking them to poles via their anuses and doing it so neatly that he kept them alive for days as their internal organs died, while crows fed on their still-live flesh. Dracul, who ruled Romania in the mid-1400s, is reported to have executed around 100,000 persons via this method. Many other so-called civilisations have used other methods of torture and slow deaths to quell dissidence, launch terror and punish crimes.

However, in all those cases, it was deemed that there might have been some crime for another which they committed. Our ancestors who took the transatlantic voyage after being grabbed against their will, experienced atrocities at the hands of the Europeans which were far worse than that which Jesus experienced on the cross. And remember, Jesus was no fool; he knew exactly what he was doing and he deliberately took a course of action which he knew would break, make him run afoul of the authorities, and thus render him liable to death. Of course, being God himself, he knew that it was not a real death because he was going to get up and finish his work before ascending to Heaven.

Our ancestors went through no Transfiguration and had no say in their trip to the Caribbean. Imagine being placed in a space which is 6' by 1' 4"; if you were a woman, 5' by 1' 4"; if a boy, 5' by 1' 2"; and a girl, 4' 6" by 1', and being chained to 500-plus others. Then imagine being packed like sardines, wallowing in your own excrement and urine, and worse, those of the others who might have drunk castor oil to build up strength just before being caught. The journey lasted thousands of miles and several months. Sometimes up to half the number of Africans died on board and the sick and infirm were cast overboard to swim and tread water for hours, if they could swim.

Those who died at sea might have been the lucky ones, because the torture for recalcitrant slaves and others involved merciless beatings, amputation, peeling of skin, being tied up and covered with honey or molasses and fed to ants. Oftentimes the punishment was for no other reason than to satisfy an overseer's sadistic bloodlust.

Nonetheless, some of us survived, and finally, out of the benevolence of the British Crown, we were emancipated and then given independence in 1962. Yet 50 years later, we have the Queen as our head of state. We are British subjects, but not British citizens. Something went awry, because Section 2(3) of the Jamaica Independence Act allowed those of us born before 1962 to keep British citizenship. After all the blood shed by our forefathers and foremothers, we should have been given that option today.

My view might seem radical, but it is a serious one. In other columns and other fora, I have consistently maintained that England owes us, the descendants of transported Africans, large amounts of monetary and other tangible recompense for the two centuries of enslavement. Thus, if Jesus can buy us piece of the Kingdom of Heaven by his less-dramatic death, we must at least have the right to go to our earthly United Kingdom.