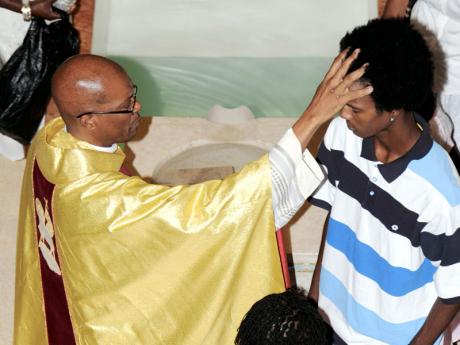 My friend Ian Boyne has written two columns lately, in which he has essentially argued the case that human rights and human dignity are ultimately grounded in Christian precepts.

For Ian, human outrage at the killing of Vanessa Kirkland, as opposed to the absence of outrage at the killing of Maas Joe's cow, is attributable to our unique status among creatures, having been "made in the image of God". Our divinely created status as human beings, according to Ian, not only confers us with a special dignity, but also hierarchical superiority over other animals. For Ian, atheists like me can't make that claim, and must instead "accede to the wisdom of Darwinian science" which, according to Ian, "has completely shattered this view of humans being in any special category".

For Ian, this Darwinian science condemns humans to being no more than just another species or "merely a part of nature", with "no transcendental place for humans above animals and the rest of nature". Based on this conflation of humans with the rest of nature, Ian argues that as an atheist and human-rights activist, I should be as passionate about animal rights as I am about human rights. If I do indeed assert the rights and dignity of humans (alone), I am effectively a philosophical parasite - "living off the heritage of religious presuppositions".

Ian's thesis has some kerb appeal, but comes up short, when subjected to close scrutiny. Indeed, Ian ultimately ends up rebutting himself, as I will later demonstrate.

First, Ian makes the error of conflating atheism with Darwinism. As Ian should know, just because one is an atheist doesn't mean one automatically subscribes to Darwinism or any other secular theory. Atheism is simply a lack of belief in god(s). Nothing more. I would no more assume that a bald man has a hairpiece than an atheist subscribes to evolution. For Ian, it seems one has only two possible moral foundations - theism  (Christianity) or Darwinism. For most, if not all, secularists, neither provides a moral foundation for constructing and sustaining human rights and human dignity.

In his book Letter to a Christian Nation, Sam Harris points out that "questions of morality are ultimately questions about happiness and suffering", something that a human mind can resolve entirely without reference to divine prescriptions or dictates. Quite astutely, Harris also observes "one of the most pernicious effects of religion is that it tends to divorce morality from the reality of human and animal suffering".

Ian trumpets the biblical notion of humans being made in "God's image", as if it were as indisputable as the law of gravity, which it decidedly is not. Even if this notion was indisputable, 'divine creation' of a human being does not automatically mean human dignity is inherently part of that creation. If the Christian God did indeed invest human beings with an 'inherent dignity', why the need to saddle them with 'original sin', or worse, the need for human sacrifice to expiate this 'sin'? If all humans are divinely endowed with this dignity, would Ian explain how a dignity-conferring deity sees the need to predeterminately consign so many of them to eternal damnation for failure to 'believe'?

Now, as Ian has previously acknowledged, Christianity has been less than stellar in its stewardship of human dignity. Secular humanism, which does have human dignity as a core value, has been as unremitting in protecting this value, as religion has been in devaluing it in people seen as 'different' or 'not like us' or 'inferior'. Christianity, let us remember, has provided the justification for slavery for a much longer time than it has preached against it. Would Ian say that Christians in Jamaica believe in the 'inherent dignity' of gay men? Or convicted criminals?

In his first column, Ian wrote: "The outrage over the killing of 16-year-old Vanessa Kirkland, which has even drawn the tongue of the normally quiescent Jamaica Council of Churches [JCC], reminds me of how far humanity has evolved in our moral understanding and practice."

Ian concedes two things here. First, by his own admission, the JCC normally has little to say about issues of human rights. But Ian also acknowledges that humans have, unlike other animals, a demonstrated capacity to evolve morally, even if they have to be dragged kicking and screaming to do so by us secularists. That evolution owes nothing to the designs of any pious deity; but to our human capacity for rationality, empathy and, most important, change.

Ian argues, "Secularists who say humans are special because of their intelligence, rationality or will (those who still hold that ancient view) have to say why mentally retarded, mentally ill people are still rights holders." Further, he argues that to be consistent, atheists and agnostics, particularly those who are passionate human-rights activists (like me), should equally be passionate about animal rights and vegetarianism."

With respect to the first contention, I offer the brilliant insight of my friend Ron Handlon:

"We don't advocate rights to humans ... because they are intelligent or rational (if we did, believers would be in lots of trouble). We advocate rights for all because we are intelligent, rational, empathic and compassionate. We are living, breathing, and caring people who do not need a god-father to make us behave like decent human beings."

It is those very same qualities of rationality, empathy and compassion that may also play a role in how we treat animals. Certainly, these qualities predispose me, as a secularist human being, to be disturbed by what Ian refers to as "senseless killing of dogs and cats". This is to be contrasted, of course, with the biblically endorsed sacrifices of multiple animals (and people) as demanded by the same God that Ian claims is responsible for endowing us with human dignity in the first place.

Ian, citing Sam Harris, claims that the view that "rationality somehow confers some special status on us has been blown away", because "science has undermined this notion of free will". I contend that humans are more than capable of exercising rationality, even if they can't exercise free will. It's this rationality that has, since Enlightenment, led them to resist theocratic devaluation of human dignity, and to establish, where possible, secular laws and institutions to protect such human dignity.

Ultimately, Ian rebuffs his own thesis by acknowledging that people can be good without God. Now, if indeed morality is separable from religion, it must follow that there is no need, nor has there ever been a need, for morality to "live off" religion or its heritage. To the contrary, to the extent that Christianity has abandoned its heritage of cruelty is the extent to which it has become a '"philosophical parasite" which "lives off" secular "presuppositions" like human rights and human dignity.

Hilaire Sobers is an attorney-at-law. Email feedback to columns@gleanerjm.com.