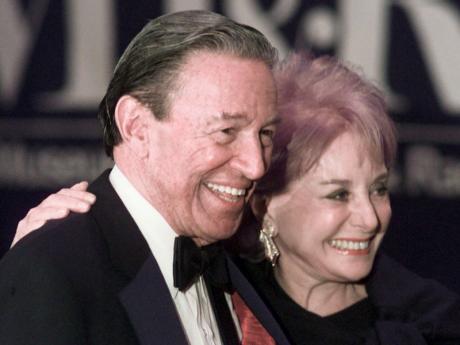 In this February 4, 1999 file photo, Barbara Walters and Mike Wallace pose for photographers before the start of a gala for The Museum of Television and Radio in New York. - see full caption at the end of story.

NEW YORK (AP):"Mike Wallace is here to see you." The '60 Minutes' newsman had such a fearsome reputation that it was often said that those were the most dreaded words in the English language, capable of reducing an interview subject to a shaking, sweating mess.

Wallace, who won his 21st and final Emmy Award at 89, died Saturday in the New Canaan, Connecticut, care facility where he had lived the last few years of his life. He was 93.

Wallace didn't just interview people. He interrogated them. He cross-examined them. Sometimes he eviscerated them pitilessly. His weapons were many: thorough research, a cocked eyebrow, a skeptical "Come on" and a question so direct it took your breath away.

He was well aware that his reputation arrived at an interview before he did, said Jeff Fager, CBS News chairman and Wallace's long-time producer at '60 Minutes'.

Wallace made '60 Minutes' compulsively watchable, television's first newsmagazine that became appointment viewing on Sunday nights. His last interview, in January 2008, was with Roger Clemens on his alleged steroid use. Slowed by a triple bypass later that month and the ravages of time on a once-sharp mind, he retired from public life.

During the Iranian hostage crisis in 1979, he asked Iran's Ayatollah Khomeini - then a feared figure - what he thought about being called "a lunatic" by Egyptian President Anwar Sadat. Khomeini answered by predicting Sadat's assassination.

Late in his career, he interviewed Russian President Vladimir Putin, and challenged him: "This isn't a real democracy, come on!" Putin's aides tried to halt the interview; Putin said he was the president, he'll decide what to do.

"Many people who weathered a Mike Wallace interview grew to respect him greatly and, you know, have great regard for him because I don't recall anybody ever saying to me, 'He took a cheap shot' or 'He did the obvious,' or that he was, you know, playing some kind of game," Fox News Channel Chairman Roger Ailes said on Sunday. "He actually was trying to serve the audience, and that's what made him great."

When a Wallace story found little to back up rumours that Coors beer executives were racist, the relieved company took out newspaper ads trumpeting that it had survived. The ad's top: "The four most dreaded words in the English language: Mike Wallace is here."

He was equally tough on public and private behavior. In 1973, with the Watergate scandal growing, he sat with top Nixon aide John Ehrlichman and read a long list of alleged crimes, from money laundering to obstructing justice. "All of this," Wallace noted, "by the law-and-order administration of Richard Nixon."

The surly Ehrlichman could only respond: "Is there a question in there somewhere?"

In the early 1990s, Wallace reduced Barbra Streisand to tears as he scolded her for being "totally self-absorbed" when she was young and mocked her decades of psychoanalysis. "What is it she is trying to find out that takes 20 years?" Wallace wondered.

"He was hands down the best television interviewer ever," said Steve Kroft, his former '60 Minutes' colleague. "I can't think of anyone, besides (CBS legend Edward R.) Murrow, who had a greater influence in shaping television journalism."

'60 Minutes' pioneered the use of "ambush interviews," with reporter and camera crew corralling alleged wrongdoers in parking lots, hallways, wherever a comment - or at least a stricken expression - might be harvested from someone dodging reporters' phone calls. Wallace once went after a medical laboratory offering Medicaid kickbacks to doctors in this fashion.

They were phased out after founding executive producer Don Hewitt termed them "showbiz baloney". "Finally I said, 'Hey, kid, maybe it's time to retire that trenchcoat,'" Hewitt recalled.

Wallace's late colleague Harry Reasoner once said, "There is one thing that Mike can do better than anybody else: With an angelic smile, he can ask a question that would get anyone else smashed in the face."

As a young producer at the CBS' New York affiliate, Fager first dealt with Wallace when he had to cut down one of the reporter's stories to 90 seconds for a broadcast.

"I was scared of him and intimidated by him," he said. "He knew it and he would just make you more miserable. That was Mike. He always had a twinkle in his eye, and even if you were intimidated by him, it was hard not to love him."

Wallace was hired when Hewitt put together the staff of '60 Minutes' at its inception in 1968. The show wasn't a hit at first, but worked its way up to the top 10 in the 1977-78 season and remained there year after year. Among other things, it proved there could be big profits in TV journalism. It remains the most popular newsmagazine on TV.

Wallace said he didn't think he had an unfair advantage over his interview subjects: "The person I'm interviewing has not been subpoenaed. He's in charge of himself, and he lives with his subject matter every day. All I'm armed with is research."

In this February 4, 1999 file photo, Barbara Walters and Mike Wallace pose for photographers before the start of a gala for The Museum of Television and Radio in New York. Wallace, the dogged, merciless reporter and interviewer who took on politicians, celebrities and other public figures in a 60-year career highlighted by the on-air confrontations that helped make '60 Minutes' the most successful primetime television news programme ever, has died. He was 93. - FILE