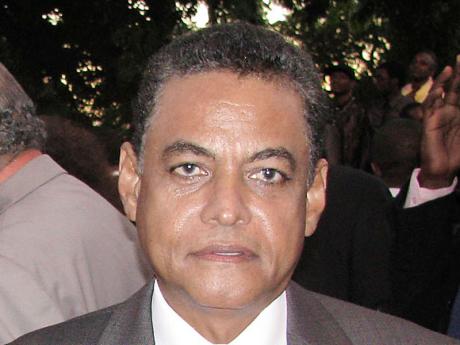 It took him nearly a week to apologise over the embarrassing St James flag fiasco but Minister of Local Government and Community Development Noel Arscott finally did.

"On behalf of the Government of Jamaica, I wish to express my unreserved and sincerest apologies to the Jamaican people for the inadvertent misuse of the colours of the Jamaican flag at the recent swearing-in ceremony of the newly elected mayor of Montego Bay," said Arscott yesterday as he announced the first casualty from the foul-up.

The person who allegedly instructed the decorator, Courtney Hume, a special adviser to West Central St James member of parliament and minister of state in the Ministry of Industry, Investment and Commerce, Sharon Ffolkes-Abrahams, has lost his job.

"Our investigations have revealed that his involvement in organising the function, whether he instructed the decorator or not, was not authorised," asserted Arscott.

"Mr Hume's resignation has been accepted by the relevant office with immediate effect, and we thank him for his service," added Arscott.

"I wish to assure the Jamaican people that a full investigation is being carried out, and the chips will fall where they may," said Arscott as he indicated his concern about the "perceived disharmony resonant across some local councils".

"With regard to the St James incident, my investigations thus far have revealed that errors may have been committed by a number of parties," he said.

"These could extend to the Municipal Service, the private contractor, and persons in the employ of the State on the recommendation of the political directorate."

It is with this in mind that Arscott said he has instructed the Municipal Services Commission to investigate the role and responsibility of the secretary manager, and his staff in this matter.

"One resignation is not enough for what was a web of deceit and an attempt to mislead the country," Tufton told The Sunday Gleaner.