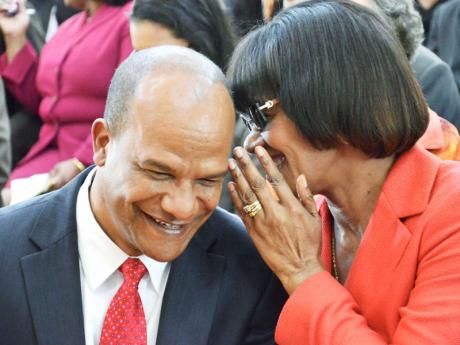 Observers, analysts and technocrats are of the view that the People's National Party (PNP) has failed to deliver on many of its campaign promises within its first 100 days.

During the national leadership debate that preceded the December 29 general elections last year, PNP leader Portia Simpson Miller said she would take the fight to corrupt officials in the government service.

"I am very strong in terms of fighting corruption and will not tolerate any form of corruption in a People's National Party government.

"I will ensure the strengthening of these institutions like the Office of the Contractor General and all the institutions having to investigate corruption and deal with corruption when they are reported," said Simpson Miller.

However, Contractor General Greg Christie, believes the Simpson Miller administration has not been strong and decisive on corruption.

Christie, the watchdog of the country's contract awards process, said his office has not been strengthened at all since the PNP was elected to form the Government.

According to Christie, he wrote to the prime minister on her first day in office, presented her with more than 26 recommendations and informed her that he would be obliged to meet at a time convenient to her.

"I haven't even had an acknowledgement of the letter," Christie said.

Simpson Miller also pledged to remove the General Consumption Tax on electricity to ease the burden on households and the production sector. That too has not materialised.

The PNP president also promised to finance a national export strategy and to work with exporters to bring in more foreign exchange into the country.

But Vitus Evans, president of the Jamaica Exporters' Association (JEA), told The Sunday Gleaner that the promise to exporters has not been kept.

"So far, nothing has happened yet (but) we will keep lobbying for it," said Evans.

The prime minister also promised a commission of enquiry into the Trafigura affair. But the Government has failed to deliver on that promise in its first 100 days.

"Certainly, we have nothing to hide and anything that can clear the air on Trafigura, which was a contribution to a political party," she said.

Asked how long it would take her party, if returned to power, to renegotiate the Jamaica Development Infrastructure Programme, Jamaica Public Service and International Monetary Fund contractual agreements, Simpson Miller said it would be done within the PNP's first and second week in government.

None of the referenced contracts have been renegotiated.

However, to the Government's credit, it has delivered somewhat on its crisis jobs programme - Jamaica Emergency Employment Programme (JEEP). After sputtering, the government's JEEP left the garage last month.