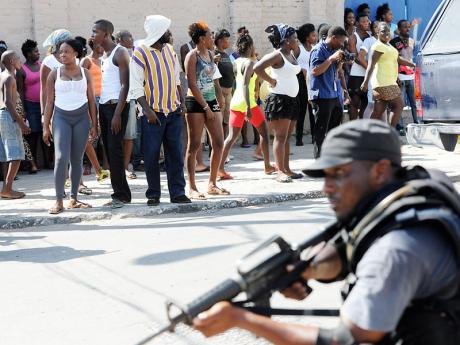 A too-talkative national security minister seeking to justify his failings and a contrastingly taciturn and inactive justice minister are viewed as the dominant features of the crime and justice portfolios, during the first 100 days in the new Portia Simpson Miller administration.

The crime portfolio that grabbed unwanted public attention, exacerbated by some questionable police killings, is being managed by Peter Bunting, while Mark Golding administers the justice dimension in the Portia Simpson Miller Cabinet,

Both areas are, however, being monitored by Delroy Chuck on the Opposition benches and in his assessment, both men eke out failing grades on his scorecards for 100-day performance.

"Can you imagine that the minister of national security has taken all of a hundred days talking about a new use of police force and what he plans to do with the Proceeds of Crime Act (POCA)."

Chuck who took over the justice portfolio near the end of the JLP tenure in 2011, appeared to be in fine mettle as he reeled a list of bills which he said was langishingh somewhere, awaiting passage when the PNP took over.

These include the Impeachment; Defamation; Special Prosecutor; Building Act; Anti-gang; Traffic and DNA bills. "They were ready when we left office," he asserted. "All need to be done."

He complained that over the period, crime slipped with troubling determination up the radar with an active police team lead by Commissioner Owen Ellington working overtime to stave a disastrous crime situation.

Chuck would not let slip Simpson Miller's promise that the legislative agenda would be rolling full steam within two weeks of her ascension to office.

Alongside Bunting's "dismal display", Chuck said justice, being steered by Golding, languishes bewilderingly at a standstill. "The legislative programme is at a standstill, it has not even started," Chuck told The Sunday Gleaner.

It seems to be poetic justice for an Opposition which was battered during its first months in office, when crime levels soared and the pursuit of justice appeared to fumble.

The PNP Opposition was merciless during the corresponding period of 2007 as it came after the JLP Government, and within nine months former National Security Minister Derrick Smith was casualty in the thin parliamentary majority of that party.