Justice ministry a 'nightmare' to unravel 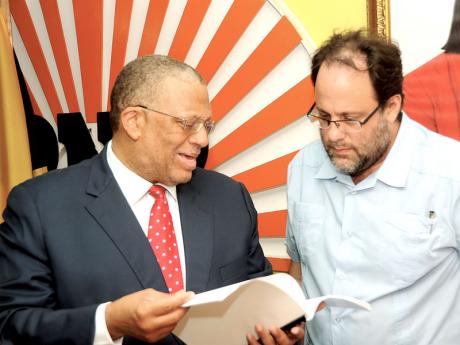 Justice Minister Mark Golding is seeking to explain away the Government's failure to table any legislation in Parliament in its first 100 days .

He said he was forced to spend the bulk of the period wading through the erratic disorder which he stumbled on when he assumed office.

"Significant work has been done on the legislative agenda since we took office," asserted Golding.

"When we took office, it was in a state of disarray because there was a long list of legislation on the agenda which was so huge that it had no chance of getting through, with over 180 items with only eight being passed.

Golding said from day one, he had to set to work on rationalising the seemingly unending list in a bid to emerge with a viable plan.

"We have drilled down and prioritise those which we think need to be tackled first," he said.

The justice minister has also claimed that he stumbled across a quality-control nightmare.

"We had to review the bills that were, supposedly, in a state of readiness and ensure that they were in a condition that they could be tabled," asserted Golding.

"The fact is that there were various bits of legislation that could be, and had been tabled but had to be improved because on reviewing them closely, they had various defects which needed to be sorted."

Golding promised that with the jitters now out of the way, a significant volume of legislation would be shortly be reaching the table of Parliament.

These include the Interim Payment legislation; the Amendments to the Evidence Act; Amendments to the Legal Procession Act; the telecoms legislation; (which he said was prepared in a hurried way without the necessary scrutiny at the time). "Five or six bills are at a point at which are going to start tabling them."

The minister was also dismissive of criticisms of the Government's failure to enact new legislation since it too office in January 2012.

"It's the role of the Opposition to criticise, quite often doing so without knowing what's going on," Golding charged.

"In this case, I would say the reason that we have not seen legislation going forward in the first 90 days has been because we want to ensure that what we are bringing forward has the requisite quality to justify being put into Parliament."

Golding said that his office would, as a key priority, review the legislation prepared by the previous administration.

The justice minister referred to the Special Prosecutor Act which he described as a classic case of unprepared legislation.

"Virtually, everything they touched had to be substantially amended in Parliament, that was the reason that so little legislation was passed in their time. They were doing 18, on average, bills per year compared to the previous five years prior to 2007, the volume was averaging in the low 30s."