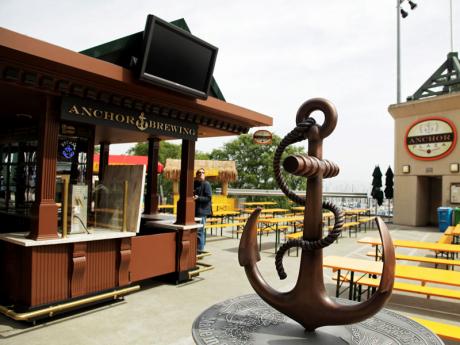 Fine wine is said to improve with barrel ageing. So why not fine beer?

That's the thinking behind the emerging craft beer trend of ageing brews in the barrel to give them more complexity.

"There's something extra about the flavour," says Dougal Sharp, master brewer and owner of the Scotland-based company Innis & Gunn, which has just introduced its Irish Whiskey Cask stout in the United States.

"Oak ageing anything - a wine, a spirit or a beer - imparts enormous depth of flavour and mellowness and complexity. Just think about some of the best, the real premier cru oak-aged wines that you've had. You might not be able to point to exactly why you just love the wine, but you do because it has this enormous depth of flavour. That's what barrel-ageing gives beer."

The Innis & Gunn beer was a bit of an accident that began about a decade ago when Sharp, working for his family's brewing company in Edinburgh, got an order from an Irish whiskey maker looking for a custom-brewed beer to season whiskey barrels for a special finish. The plan was to throw out the beer once the seasoning process was over, and that's what happened at first. But then some distillery employees who apparently had practised a little initiative intervened.

"I got a call one day from the distillery to say, 'You're not going to believe this but the workers who are emptying these barrels out don't want to throw the beer down the drain because they say it's just too delicious.'"

Sharp investigated and later, after refining the process, set up Innis & Gunn with his brother, Neil. (Innis and Gunn are the brothers' middle names.) The company also makes beer aged in old rum casks, but for now the limited-edition whiskey cask stout is the only beer available here.

Aged for 60 days in a three-step maturation process, the beer is priced at $12.99 a four-pack and there are plans to introduce it in draft form.

Though it's still a niche in the overall industry, wood- and barrel-aged beers merited their own category in the 2011 Great American Beer Festival, with 40 entries. And they're just one of the many developments to arise from the fast-moving craft-beer scene.

"The entire American beer scene has changed over the past three decades because of today's small US craft producers," says Julia Herz, craft beer programme director at the Brewers Association, based in Boulder, Colorado.

How big is craft beer? In March, the Brewers Association, which represents small and independent brewers, released preliminary 2011 data showing a 15 per cent increase in craft brewers' retail sales from 2010 to 2011, representing a total barrel increase of 1.3 million.

At the Saxon + Parole restaurant in New York City, Innis & Gunn is served as well as a bourbon-barrel-aged beer, Curieux, from Allagash Brewing Co in Portland, Maine.

Both are "really delicious", especially for beer-lovers eager to try something different, says Naren Young, who overseas the beverage programme at the restaurant. "For those people that want Bud Light, this is certainly not for them," he says. But the beers "are just home runs for those people who want to experiment".

He sees barrel-aged beer as another way craft beer producers are staking their claim as an alternative to mainstream offerings. And he likes the way it goes against the quick and fast trend that seems to apply just about everywhere else these days.

"Barrel-aging takes time and adds such a nice complexity," he says. "The craft movement has enlightened people to what small-batch beer can be."