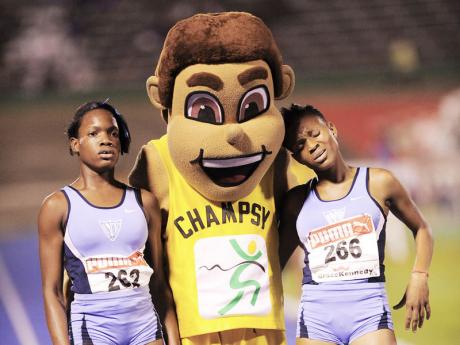 Marleena Eubanks (left) of Edwin Allen, winner of the girls' Class Two 1500m, and her teammate, Sanikee Gardner, are congratulated by Champs mascot Champsy at the ISSA/GraceKennedy Boys and Girls' Athletics Championships, at the National Stadium recently.- Ricardo Makyn/Staff Photographer

There is profound wisdom in Howard Cosell's well-known statement, "Sports is human life in microcosm".

We need only look as far as the recent Inter-Secondary Schools Sports Association (ISSA)/GraceKennedy Boys and Girls' Athletics Championships for proof of the American sports journalist's insightfulness.

Both schools serve as powerful examples for all who aspire to great achievement in their professions and personal lives. They teach an important life lesson we all need to master before claiming success.

Here's how Dr Paul Stoltz characterises this lesson in his book, Adversity Quotient.

It reads: "Adversity Quotient - which is one's ability to withstand adversity and surmount it rather than being crushed - is the most important factor in achieving success."

Resilience is defined as your ability to bounce back from hardship and adversity. And that's the ultimate lesson you can learn in your career and in life.

It's easy to understand why. Problems and obstacles are inevitable. No matter how well your career has been going thus far, everything can change for the worse in a moment.

You can get fired, laid off, or sidelined for an expected promotion. You can be suddenly diagnosed with a serious illness. You could ruin your reputation over some infraction. Your best friend might betray you. You might end up trying unsuccessfully for years to find a steady job. In short, anything can happen.

If you refuse to quit, however, you can bounce back and eventually succeed.

Calabar's athletes could have allowed the 'rat' taunts to dampen their spirits and hurt their performance. Instead, they used it to motivate themselves to athletic greatness. From them, we can learn to give our 'Utmost for the Highest', no matter what.

Edwin Allen High, which happens to be my alma mater, could have become disheartened after coming so close to victory and failing in the last few years. Instead, they used their failure to fuel their hunger to win.

In that, they have truly lived up to our school motto, Transeamus in Exemplum, which means 'We shall be an Example.' They provide a wonderful example of the truth that a quitter never wins, and a winner never quits.

Glenford Smith is a motivational speaker and success strategist. He is the author of a new book 'From Problems to Power: How to Win Over Worry and Turn Your Obstacles into Opportunities'. Send feedback to glenfordsmith@yahoo.com