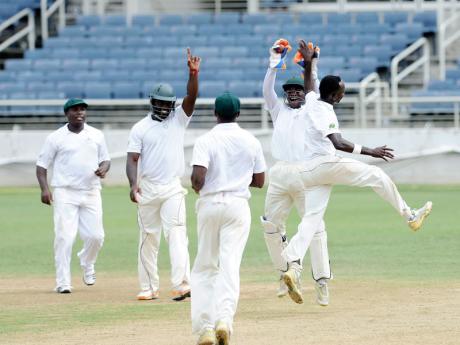 Jamaica's spinner Nikita Miller (right) and wicketkeeper Horace Miller hi-fives while they are joined by their teammates in celebration for the fall of the wicket of Barbados' Rashidi Boucher, caught by Miller.

A patient and unbeaten knock of 96 from Jonathan Carter put Barbados in a strong position to claim first innings points over Jamaica, heading into today's third day of the West Indies Cricket Board Regional Four-Day Tournament final at Sabina Park.

The game, which could very well be decided on first innings given the fact rain fell twice yesterday, and could be on the cards again today, is scheduled to resume at 10 a.m. today with Barbados on 197 for three in reply to Jamaica's first innings score of 273.

Solid-looking opener Rashidi Boucher, who made 52, and the in-form Dwayne Smith, who is not out 16, are the other batsmen who gave Carter valuable support.

Bowling for Jamaica, speedster Andrew Richardson, with two for 45, has taken most wickets.

"I would say Barbados are in front at the moment. But having said that 76 runs is still a lot of runs to get and it only takes seven balls to get seven wickets," said Tamar Lambert, captain of Jamaica.

"Hopefully come tomorrow we can come and get a good start and put some pressure on them as they know that they are not yet out of the woods and it is for us to continue to believe that we can get the job done," added Lambert.

Resuming the day on 266 for eight, the Jamaicans were only able to add seven runs to the total with Nikita Miller, who was 29 out overnight, ending unbeaten on 34 to finish as the innings' third highest scorer.

With a challenging total on the board, Jamaica reaped instant rewards when an in-swinger from Richardson trapped Omar Phillips leg before wicket without a run on the board.

Young batsman Kyle Hope joined Boucher and they moved the score to 30 before the latter was caught at short extra cover by David Bernard Jr for 13, while forcing a drive off Richardson.

However, this was the only success that Jamaica would have as thanks to the elegant-looking Carter and the equally patient Boucher, Barbados were able to consolidate taking the score to 174. The partnership yielded 144 runs and was only broken when spinner Miller, resorting to using the bowler's footmarks to generate extra spin, drew Boucher into a forward defensive shot and had him caught by outstanding wicketkeeper Horace Miller.

Smith came to the crease and along with Carter, the pair added 19.

Miller with 1-39 is the only other Jamaica to have taken a wicket on a day on which Bernard Jr failed to find his usual line-and-length range, Sheldon Cotterell was not at his fiery best, spinner Odean Brown bowled too flat and short and Lambert, despite trying his best with his part-time off-spin, could not get a breakthrough.

"Our plan was to come and get the last two Jamaican wickets early and it worked," said Barbados' captain, Shamarh Brooks.

"We then saw Carter and Boucher putting on a 100-odd run-wicket partnership after losing our first wicket to the first ball, which consolidated the innings," said Brooks.

"Our next aim now is to get first innings as quickly as possible and try not to lose any more wicket, and then go on from there and make a good game of the contest."