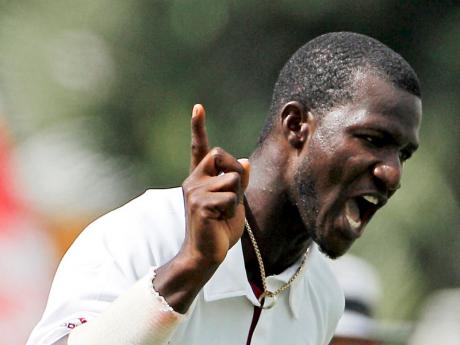 PORT-OF-SPAIN (CMC):Following a frustrating three-wicket loss to Australia in the first Test four days ago, West Indies will now seek to regroup as they go in search of series-levelling win in the second Test which bowls off here at Queen's Park Oval today.

West Indies dominated the Aussies for most of the Kensington Oval Test only to lose control on the last two days and plunge to a disheartening defeat late on the fifth day on Wednesday.

Captain Darren Sammy told reporters yesterday that despite the heartbreaking defeat in the first Test, his side was up for the fight over the next five days.

"We've got to play cricket over a five-day period or however long the Test match lasts. We've got to look to be more focused and look to win the key moments of the game," Sammy said.

"There's been motivation from the start of the one-day series. We believed as a team we were growing and we have that never-say-die attitude to go out there and fight and we've demonstrated that throughout this series.

"We're going in (this match) with that same mentality and we're going in with a positive mindset that we can beat Australia."

West Indies paid the price for one wretched period in the Barbados Test when they lost three wickets for four runs at the top of their second innings, 25 minutes before tea on the fourth day. They never recovered and were bowled out for a paltry 148, after they had amassed an impressive 448 for nine in their first innings.

Sammy said the Windies had learnt from the experience and would be looking to address those deficiencies.

"The boys are keeping their heads up. We know it was more or less two hours or one session that Australia took the game and dominated the game and if we could eliminate this in this Test match we can be victorious," Sammy pointed out.

"We spoke about it as a batting group and we just need to be mentally prepared to bat in two innings of a Test match. The guys are aware so we just have to go out there and execute properly.

He continued: "The major factor for us was in the second innings where we didn't put a score on the board. We need to score runs in both innings and bat well in both innings.

"Also, the Australian lower order put up good runs which were crucial in the last Test, so we must look to finish them off once we get to number seven and look to wrap up the tail very quickly."

Speculation has been rife over the place of leg-spinner Devendra Bishoo, who failed to make an impact in the last match, sending down 53 overs for 169 runs and taking just one wicket. More crucially, he was largely ineffective on a wearing last-day pitch and the Windies were forced to turn to part-time off-spinner Narsingh Deonarine.

Windward Islands off-spinner Shane Shillingford has been added to the squad, but Sammy said no decision had been made about the composition of the final XI.

"We've included Shillingford in the line-up so everybody in the 14-man squad is eligible for selection," Sammy said. "This afternoon (yesterday) we'll meet and decide on the best combination to help us win this Test match.

"Bishoo has done well for us - he was the ICC Emerging Player-of-the-Year last year - (but) sometimes you get a dip in form. Bishoo is a guy who is still the future for us and I won't count him out after one not-so-good performance. He is still an integral part of this team."

Australia captain Michael Clarke, meanwhile, though buoyed by his side's dramatic come-from-behind win in the first Test, said the tourists would need an even greater effort in order to win again.

"The batters are going to have to work their backside off to score runs. Like I said before the first Test, West Indies conditions - and we'll probably see it (here) - you have to bat for a long period of time to make your runs and you're going to have to find a way," he explained.

"That's the tough part of international cricket, whether you're a batter or a bowler, you've got to be able to find a way to adjust."