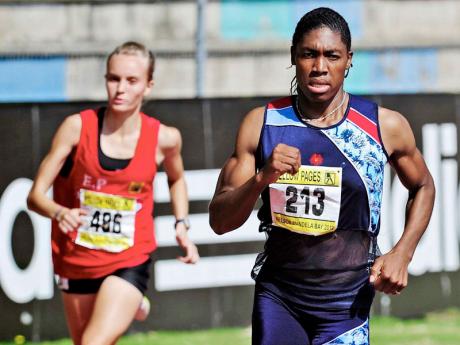 The world silver medallist led the two-lap final almost from start to finish, but could only manage two minutes, 2.68 seconds with no one to push her below the 1:59.90 she needs to be eligible for South Africa's team in London.

"It was OK for me because I retained my title, that's what's important," Semenya said. "It was disappointing because we were hoping for a qualifier (time) and unfortunately we didn't make it. But the time will come. We just need to be patient."

Pistorius finished the 400 final in 47.28, backing off in the last 50 metres after he struggled to recover from a slow start despite running in lane two.

Lebogang Moeng won in 45.75, but Pistorius is still the only men's 400 runner in South Africa to post an Olympic qualifying time this year after his season-opening 45.20 last month.

He needs one more run below 45.30 seconds on his carbon fibre blades in an overseas event to be eligible to go to London.

Semenya eased home in the south coast city of Port Elizabeth for her second-straight national title, but hasn't gone under two minutes this year. She has yet to shake off a sluggish start to her Olympic preparations under new coach Maria Mutola.

Mutola, the former Olympic 800 champion, had targeted the nationals for Semenya's first sub two-minute run of 2012.

"I don't feel pressure (to qualify). I just need to do my thing,'' Semenya said. "I train hard, I know what I need to do, so I don't need to stress. I know I can do it. The Olympics is a big step, man, everyone wants to win the Olympics. And so do I."

Semenya also ran in the 4x400 relay at the end of yesterday's meet, helping provincial team Gauteng North to victory.