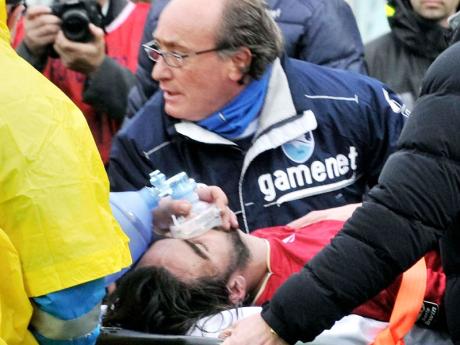 Medics assist Livorno's Piermario Morosini at the Pescara's Adriatico stadium, central Italy, yesterday, after he collapsed during a Serie B soccer match between Pescara and Livorno.-AP

MILAN (AP):Livorno midfielder Piermario Morosini died yesterday after suffering cardiac arrest and collapsing during a Serie B match at Pescara. He was 25.

Edoardo De Blasio, a cardiologist at Pescara's Santo Spirito hospital, confirmed the death, saying "unfortunately he was already dead when he arrived at hospital. He didn't regain consciousness".

It was the latest high-profile case of a soccer player collapsing from heart failure on the field, coming less than a month after Bolton midfielder Fabrice Muamba suffered cardiac arrest during a game in England. Muamba survived, but remains in intensive care.

All Italian matches this weekend were called off.

Morosini, who was on loan from Udinese, fell to the ground in the 31st minute of the match and tried unsuccessfully to get up before receiving medical attention on the field. A defibrillator was used on the player and he was conscious when he was taken off on a stretcher.

''He looked at me in the eyes when he was taken into the ambulance,'' Pescara's general manager, Danilo Iannascoli, told Sky Italia. ''We are living through a drama.''

Italian media reports said a car belonging to traffic police blocked the ambulance's way into the stadium and a window had to be broken so the car could be moved.

''I don't know if the ambulance was late, but I know that the entrance onto the pitch was blocked by a vehicle,'' Iannascoli said. ''Morosini collapsed, he tried to get back up but then collapsed again.''

The match was abandoned with Livorno leading 2-0, and some players left the field in tears. Livorno players and officials rushed to hospital, where they were told their teammate had passed away.