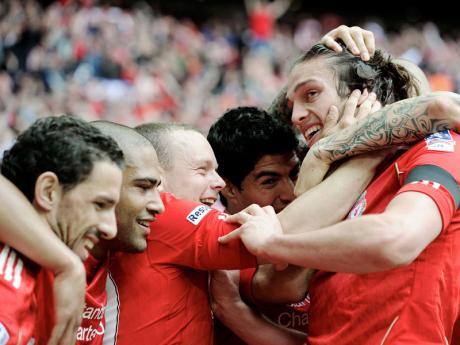 WEMBLEY, England (AP):Liverpool striker Andy Carroll headed the winner in the 87th minute to clinch a 2-1 comeback victory over Everton at Wembley yesterday and secure a place in the FA Cup final.

For the first time since arriving 15 months ago for $56 million, the striker has scored in consecutive games.

"It's the best feeling ever," Carroll said. "I've had some criticism but I've just kept on going. I get the winner here and it's a great feeling. I believe in myself every day.''

But the Wembley winner was only Carroll's 10th goal in 51 Liverpool appearances, dismal form that has been a key factor in his side Premier League struggles.

Carlos Tevez scored a hat-trick in the Premier League as Manchester City thrashed Norwich 6-1 to keep the heat on Manchester United in the title race.

But with the leaders playing today, the spotlight yesterday was on the FA Cup and whether Liverpool would be affected by the sudden firing of director of soccer Damien Comolli two days before the semi-final.

Comolli paid the price for a wretched league campaign despite presiding over the spending of more than $180 million on players in a little more than a year.

The most expensive player was Carroll, who netted the league winner at Blackburn on Tuesday night.

But against Everton, the England international hesitated with the goal in his sight after just three minutes, instead teeing up Jay Spearing, who swept the ball over.

With both Liverpool goalkeepers Alexander Doni and Pepe Reina suspended, Brad Jones had to make his first start of the season. While the Australian was picking the ball out of his goal after 23 minutes, his dithering defenders were at fault.

Jamie Carragher and Daniel Agger both hesitated as the ball landed between them and Carragher's eventual attempted clearance rebounded off Tim Cahill. The ball fell at the feet of Nikica Jelavic, who shot under Jones.

Everton responded to their opener by also gifting Liverpool an equaliser. Sylvain Distin's attempt to pass the ball back to goalkeeper Tim Howard was far too weak and Luis Suarez nipped in to seize the ball and score.

And in the 87th minute, Carroll rose above Marouane Fellaini to meet Craig Bellamy's free kick and send the ball into the net with the back of his head.

"I had a few chances and should have probably scored earlier,'' the former Newcastle player said. "But I kept at it and it was a great ball in by Craig and I just had to score with that one and I did.''

While Liverpool are below Everton at eighth in the Premier League, the title race is still on between the Manchester rivals.

City are two points behind United ahead of their neighbour's match against Aston Villa. But City's players will be wondering where they might be had Tevez not gone to Argentina on an unsanctioned six-month break.

In only his second start since returning, the striker stunned Norwich goalkeeper John Ruddy with a swerving strike from the right edge of the area to open the scoring in the 18th and then set up Sergio Aguero with a playful back-heel pass for the second goal in the 27th.

Tevez and Aguero added their second goals in a two-minute span in the second half before Tevez completed his hat-trick by slotting the ball into an empty net in the 80th.

Aguero was denied his own hat-trick when he hit the post in injury time, but Adam Johnson added the sixth moments later.