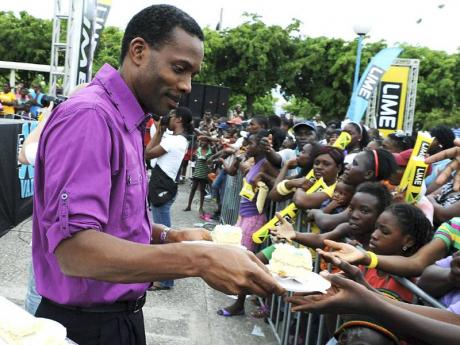 Garfield Sinclair, LIME managing director, helps serve cake to the large crowd which gathered at the Sir William Grant Park to witness the launch of the LIME XL Value campaign. The telecommunications company launched the mega four-part offer with the sharing of a giant 8'x8' cake on Friday. - Contributed

LIME has announced it is rolling out a slate of low-cost prepaid mobile Internet service packages with rates cut by as much as 66 per cent.

The telecommunications firm said in a release yesterday that the move was part of its continuing drive to increase Internet penetration nationally.

LIME
said its postpaid mobile Internet rates would remain the same, but the
data allocation for both the 'casual user' and 'regular user' packages
would be increased.

LIME said its mobile Internet service gives customers the ease and convenience of accessing the Internet with wireless devices such as smartphones, MI-FI units, dongles, and USB modems, or any other enabled devices.

Last year, LIME introduced the FLIPtop, a low-cost laptop which the company bundles with its postpaid ADSL and mobile Internet service packages.

"LIME is the company that brought the Internet to Jamaica. We built the network that supports the majority of Jamaica's data communication, and we believe that we have a responsibility to ensure that more Jamaicans have access to the kind of technology that will improve their quality of life, be it personally, academically or professionally," said Garry Sinclair, LIME's managing director for Jamaica and Cayman.

"By slashing the cost of our prepaid mobile Internet service, we are making it easier and more affordable for customers to get Internet while on the go from practically anywhere in Jamaica. Everyone - students, business people, professionals and recreational users - will experience the benefits of having Internet access without being tethered to a wired connection," he added.

Yesterday's announcement came days after LIME launched its XL Value campaign with a five-hour-long promotional event which culminated with the cutting of a giant 8'x8' cake at the Sir William Grant Park in downtown Kingston on Friday.

The new rates and packages are listed below: