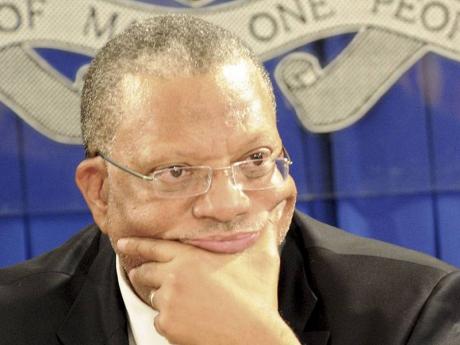 It looks like Finance Minister Peter Phillips has his hands full with the IMF. Columnist John Rapley says modern democracies are becoming less about the voice of the people and more the voice of external forces like the IMF.

The right to vote was won in hard-fought struggles over many generations. The principle established was that no government could tax and spend its people's money without their consent.

In the austerity programmes now being implemented in several countries, external agents, from the International Monetary Fund to foreign governments, have been dictating the terms of expenditure to their partners. In the Greek bailout, the Germans went so far as to suggest that the management of Greek expenditure should be done by an externally appointed committee - a suggestion which was later withdrawn in the face of Greek ire. But citizens find that their vote counts for ever less, as bond investors dictate economic terms to governments.

This tendency, of power shifting away from the people and towards powerful economic interests, is being reinforced by the practice of politicians' selling access. Britain's ruling Conservative Party was recently found to have been promising top donors exclusive meetings with the prime minister, just as former US President Bill Clinton used to allow top donors a sleepover at the White House. A recent US Supreme Court ruling lifted limits on political donations, opening the door for 'Super PACs' (political action committees) to channel masses of private money into election campaigns.

So it's not surprising that ordinary citizens are turning their back on democracy. Voter turnout has been declining in many democracies as citizens, especially young voters, judge that their vote counts for less. They see powerful interests carving up government, and twisting governments to ends quite different from what they'd voted for.

Politicians love to blame these external players, particularly the IMF, for usurping their power. But the truth is that the politicians sold us out. In their own quest for electoral victory, they have been auctioning democracy to the highest bidders. And that has enabled the rich to claw back power that belonged to the people.

A politician who looks at the existing tax pool and then proposes a spending plan based on those revenues is sticking to the terms of the contract: you pay the taxes, you tell me what to do. But inevitably, at some point, a clever politician came along who spotted an opportunity: give the people a few extras at no further charge, and they are sure to vote for you.

How do you fund these extras? Sell a few bonds, and you boost your revenue immediately. Of course, that binds you into a long-term contract to the bondholder. But the payments come due after the election - sometimes, decades after the election. When Keynes said that in the long run, we're all dead, he hadn't meant it to be a tip for vote-buying.

Almost everywhere, democratic governments have gone down this slippery slope of making present commitments on credit. The welfare states of the Western world were not funded by their beneficiaries, but by bonds. And with populations ageing, the taxes on the next generation of voters will rise. However, their own benefits are being reduced to balance budgets. Today's young voters will pay more than they get, and they will be told they have no choice. So much for no-taxation-without-representation.

Democracies are inching back towards serfdom. Future generations will be told by their overseers what they will pay, and what they will get. Their voice will count for less.

The bondholders, like all moneylenders, are merely claiming their pound of flesh. If they stuck to the terms of the auction, you can't really blame them. If they seem like odious taskmasters, that's because they are only telling us what our leaders wouldn't, all those years ago: that they were selling the rights our ancestors struggled for to the highest bidders, and laughing their ways to the political vote-bank.

As democracy slides back to a new feudalism, increasingly dominated by a nobility of bankers and investors, it won't be because of any backroom plots. It will be the fault of a generation of politicians who put short-term popularity over the principles of representation-for-taxation.