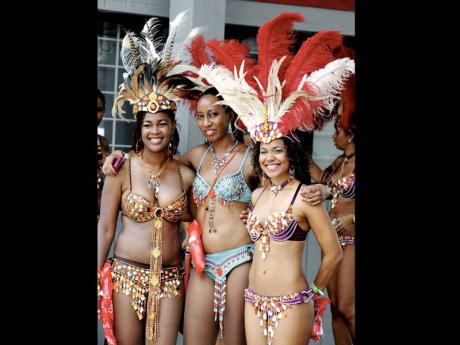 They flashed their lovely smiles and colourful costumes for the camera, during Bacchanal Jamaica's Carnival Road Parade, yesterday. 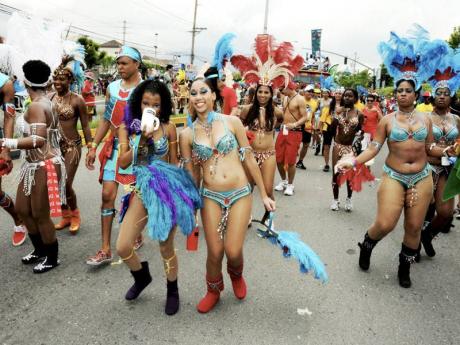 Revellers took to the streets in their numbers despite the rain during Bacchanal Jamaica's Carnival Road Parade, yesterday. - Photos by Winston Sill/Freelance Photographer 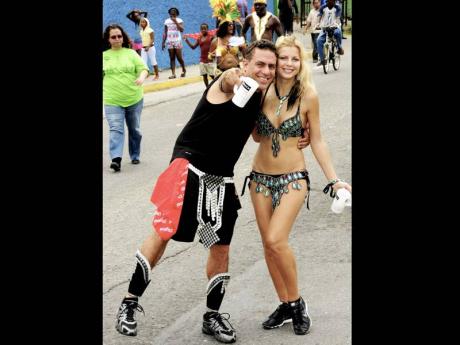 The annual Bacchanal Road March, still managed to deliver an exciting entertainment package yesterday despite the constant rain. The day was overcast from as early as 8 a.m., but by 10:30 a.m., the revellers and carnival trucks were ready to take over the streets of Kingston.

Decked out in a multiplicity of colours, thousands of revellers modelling costumes bearing different designs, were determined to overcome the inclement weather to deliver that highly anticipated climax to the carnival season.

After an exciting opening segment of calypso music, some revellers stopped at Act II Restaurant along Trafalgar Road for lunch at 12 p.m.

There was a truck playing the Overproof rhythm carnival remix and patrons sipped liquor and ate while they awaited the rest of the revellers to catch up.

The raving atmosphere was good and the momentum was building. However, at 1 p.m., the clouds began to rain on the parade. Many searched for shelters while others stood in close proximity to their band, hoping the rain would soon end.

At 2:12 p.m., the rain came heavier, leaving revellers scampering for dry areas, but not too far from the music.

By 3 p.m., it was time again for carnival action and like a true leader, the Bacchanal truck lead the way anchored by the Seaview All Star Marching band who played some popular calypso music which the revellers appeared to enjoy.

The Digicel truck followed next and they added some variety by playing dancehall selections such as Gyal A Bubble by Konshens.

The Bacchanal Babes Band carried a huge female posse and they too played the Overproof rhythm soca remix and revellers could be seen gyrating on each other while blowing their horns and whistles.

As the parade neared Waterloo Road at 3:40 p.m., the rain began to interrupt again, sending some revellers scampering for cover in nearby shelters.

The rain finally held up at 4 p.m., and made way for more carnival raving. The Digicel truck re-engaged the audience by playing popular carnival songs such as Mad Bull Fever by Machel Montano.

The Gleaner invaded the roof of the Appleton truck where some core carnival participants were having a soca party. Eight-time road march participant Alicia Thond, believed that the rain had no impact on the carnival spirit.

"I have been to carnival eight years and this is one of the bigger crowds I have seen. A little rain does not hurt, it only heightened the vibe more," she believed.

The Road March concluded at the National Stadium and it can safely be said that Bacchanal Road March 2012, conquered all odds to deliver another entertaining package to the thousands who turned out.