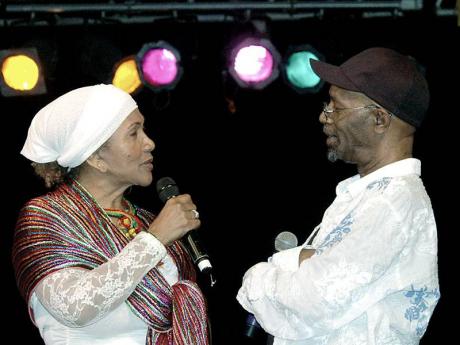 Marcia Griffiths (left) and Beres Hammond performing together at Western Consciousness at Paradise Park, in Westmoreland on Saturday night. - Photo by Adrian Frater 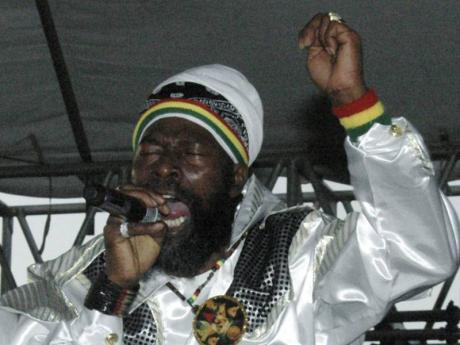 Despite being somewhat peeved by the closing slot he was given, the fireman Capleton nonetheless left patrons at Saturday night's Western Consciousness 2012 in a musical tizzy as he blazed lyrically with an impressive hit-filled set at Paradise Park, in Westmoreland.

With the early morning sun bathing the scenic riverside venue, Capleton took the stage at 6:05 a.m., and the energy level immediately hit the proverbial roof. It was all dancing and screaming as the fans reacted with glee to songs like, Bun Dem Out, Tun it Up, Small World and Jah Jah City among other trade mark hits.

However, while Capleton ruled the morning, the night definitely belonged to reggae premier crooner, the charismatic Beres Hammond. Clad in a full jeans suit, the veteran singer, who after his performance received a special citation from the Mayor of Mt. Vernon, in New York, for his contribution to music globally, spared very few of his hits in his glitzy set.

The females were clearly in their element as the lyrical master all but had them eating out of his hand, belting out songs like, No Disrespect, One Dance, She Loves Me Now, Come Back Home, Tempted to Touch, What a Night; and, If You See me Crying, which was done in combination with songbird Marcia Griffiths.

Prior to her one-song combination with Hammond, Griffiths had earlier distinguished herself with her pleasing set, which was also chockfull of hits. The iconic female legend stirred much excitement as she warmed hearts with hits like, Tell Me Why, I shall Sing, Closer, a pleasing deejaying rendition of Fire Burning, a medley including songs like, Solomon and Welcome to Jamrock; and her well-deserved encore, Dreamland.

On a night when the vast majority of the artistes held their own, the first artistes to really drive fever-pitch excitement into the crowd was House of Leeds' recording star Iyahblazze, who recently won the New Artistes of the Year Award at the 2012 Linkage Awards, in New York.

Iyahblazze, clad in an eye-catching golden outfit, which was laced with red and green, could do nothing wrong for the fans as he masterfully unleashed, Say A Prayer, Heart Fe The Poor and Woman I Need.

The much-touted 'British Invasion', which saw veteran singers King Sound and Levi Roots playing their respective sets with a full band, inclusive of a wide array of wind instruments, was an absolute treat and would possibly been a perfect gem had Levi Roots not gone on a little bit too long.

King Sound was like a master craftsman, soothing souls and minds with his expert lyrical touch on songs like, Book of Rules, Games People Play, I Shall Sing, Brainwashing and I Shall Be Released, which was done as a tribute to the struggles of Nelson Mandela.

Levi Roots was compelling on songs like, Cool Me Off, Ghetto Life and Herbs and Spice. However, his social commentaries created a negative reaction from some fans.

In a set with a rich international flavour, Duane Stephens once again showed why he is picking up such solid traction globally. While his set was not long, it was quite potent with songs like, Nah Pay, Ghetto Pain, Cottage In Negril, Nowhere To Ran, and the compelling August Town, which he did as an encore.

While not over-extending themselves, the messenger Luciano and superstar-in-waiting Romain Virgo both delivered quite pleasing sets, laced with their trademark hits. Ibahmar and Prophecy were also quite good in terms of roots-flavoured songs.

The surprise performances of the night came from singer Droop Lion, who evoked memories of Peter Tosh; and the crisp-sounding C Sharpe Band, which was simply amazing. The energetic Droop Lion was all the rage as he impressed with songs like, Dock of the Bay, Natural Disaster; the soul-stirring Free Way, and Mama Soon Come Back. C Sharpe was vocally intriguing and instrumentally awesome, leaving no doubt that they are a class act.

Emerging female artistes Jah9, new singer I Noah and the smooth sounding Steam, also distinguished themselves in the star-studded line-up which was assembled by promoter Worrell King. MCs Cordel Green and deejay Linkage added flavour to the package.