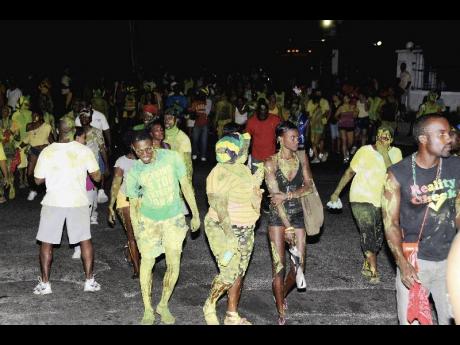 Revellers take their 'soca' and 'paint' to the streets. 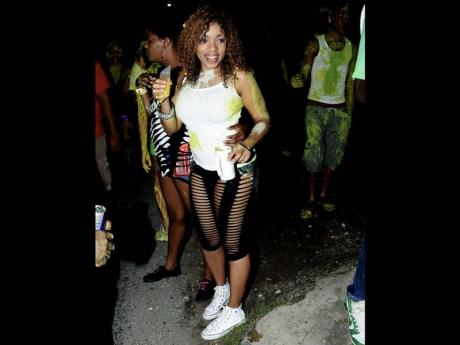 Destra enjoying the vibe on the road during Bacchanal Jamaica and Appleton Jamaica Rum's J'Ouvert and road parade, under the theme 'Alien Invasion', held at The New Mas Camp, Stadium North, on Friday night. - photos by Winston Sill/Freelance Photographer
1
2

Bacchanal J'ouvert got off to a slow start. At about 10:45 p.m., the venue was practically empty.

However, not long after, patrons began filing in, dressed for the paint in their tee shirts and shorts, most of them with their heads wrapped.

People lymed and danced while others scampered to the Bacchanal booth to get some of the giveaways.

An hour later, the emcee, ZJ Bambino, took to the stage to kick off the night's proceedings. DJ Ryan from Trinidad got the crowd amped up with songs such as Palance by JW and Blase, Miss Behave by Fay Ann Lyons and Throw Wine by Prophet Banjamin.

The patrons were ready to party as was evidenced by their gyrating, wining and waving of flags in the air.

It was just minutes after midnight when Bambino and DJ Ryan kicked the show into high gear. Bambino invited the Appleton girls onstage with the Jamaican flag to provide entertainment for the patrons. There was also brief laughter when Bambino remarked, "thank God, you have green in the flag."

The 'Bacchanalists' were then ready to 'get on bad' when songs like Pon The Floor by Vybz Kartel, Wotless by Kes The Band, 6:30 by Skinny Fabulous and Go Dung by Lil Rick and Machel Montano were played.

One of the night's biggest response came when DJ Ryan dropped Bruk It Down by Mr Vegas. Patrons were on the ground wining, gyrating to prove who could 'bruk it down' the best.

Bambino then called onstage a fluffy young lady, who thoroughly entertained the crowd with her antics.

The feature performer for the night, Destra Garcia, took to the stage at 1 a.m., dressed in a white and sequin form-fitting romper and sporting blonde hair. At this point, patrons started to move closer to the stage area. She reeled off hits such as Cool It Down, I Dare You, Wine It and Max It Up.

When Destra came off stage and into the crowd, fans were scrambling to get closer to her. She also invited Super Jigga TC from Trinidad to sing their hit single, Feel To Wine.

One of the highlights of her hour-and-a-half set was when she invited two young men onstage with her. Destra inquired of them if they knew how many languages she spoke. The first young man stated that "the only language you speak to me is love", this was met with cheers and whistles. The second young man correctly answered the question telling Destra that she spoke English, Spanish and French and was rewarded with a lap dance.

Destra invited him to unzip her shorts so she could give him a proper lap dance, much to the delight of the young man and the eager audience. Destra also mixed her soca set with a bit of pop music when she sang We Found Love by Rihanna.

Destra finished her set by singing what appeared to be the crowd's favourite Destra song titled Fly. When Destra belted out this song, almost every hand was in the air waving.

Destra ended her set on a high note and by this time the patrons were shouting for them to bring on the paint. Patrons could be seen scampering to the side of the venue to fill up containers with paint to throw on friends and bystanders, none of whom were complaining

The deejay then began playing his dancehall set and this also had the patrons in a frenzy. Songs such as Wine by Cham and O, Bubble by Konshens and Big It Up by Buju Banton, all saw the revellers rolling in the paint and dancing up a frenzy.

At 3 a.m., Bambino invited the patrons to step outside because it was time for the J'Ouvert March. Hundreds flocked to the trucks that were waiting outside the New Mas Camp to begin the journey. By this time, many who did not attend J'Ouvert but wanted to be a part of the march had also congregated at the trucks.

The march started at the New Mas Camp, moved on to Hope Road, Fairway Avenue and then back to the New Mas Camp. The revellers were in their element and could be seen gyrating on gates, fences, and utility poles throughout their journey. Many patrons ended the journey in the wee hours of the morning and remarked that is was worthwhile.