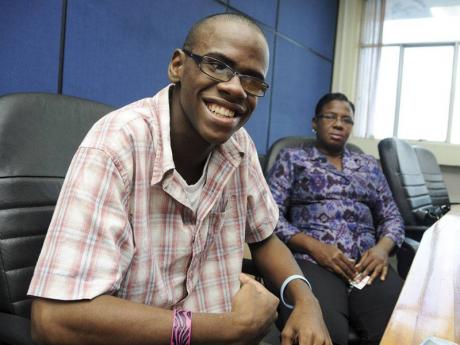 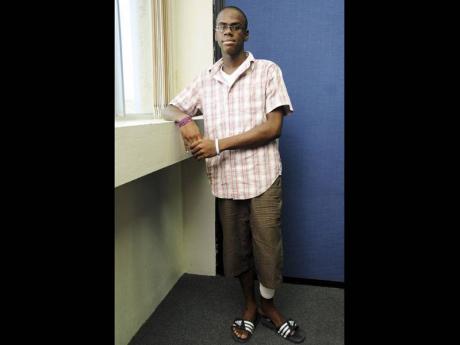 Nineteen-year-old Mario Spencer is an amazing young man. Bone cancer may have shattered his dreams of playing professional football, threatened to take his life, greatly affected his health and put his life on a different path, but throughout the three-year ordeal that would have caused many to lose hope, he remained optimistic and grounded in his Christian faith.

Once a forward for the Harbour View Under-16 team, later moving on to Santos with the hope of one day playing for English Premier League club, Chelsea, football was Mario's life.

But one afternoon in October 2009, while playing 'ball with his friends, the St George's College student felt a pain in his left knee. He tried to ignore it, but it got more intense. Even after giving up football for a week, the pain was still there.

Worried, his parents, Franklin Spencer and Cecelia Ledgister, took him to one doctor after another, but none could determine the cause of the constant pain.

It was not until January 2010, following a magnetic resonance imaging (MRI) and a biopsy that the doctors found a tumour and discovered that he had osteosarcoma, a type of bone cancer.

With the biopsy disturbing the tissue, the tumour got worse, opening up like a mushroom, growing to the size of a tennis ball and bleeding continually.

Mario's health soon started to decline. He was unable to walk and he began to lose weight rapidly, dropping from 135 to 98 pounds.

He was also unable to attend school and persons he once thought were his friends abandoned him. The once high-spirited teen soon found himself sinking into depression.

"It was at that time that I found out who my real friends were," he shared with The Gleaner.

With the cancer being at stage two, the doctors said the only option was to amputate the leg because they were afraid it might spread.

But determined not to lose his leg, Mario began to pray earnestly, and soon, his high spirits returned.

A series of tests revealed that the cancer had not spread, so he underwent a rigid regime which included nine rounds of chemotherapy.

The teen started losing his hair, was constantly vomiting, his blood count dropped dramatically, and he became extremely weak.

"At one point he almost died. His blood count dropped to below zero. He became extremely cold and weak. We had to rush him to the hospital," his mom said, recounting the frightening experience.

At the end of the successful chemotherapy, the doctors laid out their options to ensure that the cancer did not return.

"I decided on the dead man's bone because it was the best option. They said it would grow with me and it was less expensive."

Getting the funds to perform the procedure was challenging. Mario's middle-income parents were already over their heads in expenditure from taking their son's treatment this far.

"I did not know where the money was coming from, but he said, 'Mommy, I'm going to get the money', and I said, 'Where? Tell me where'," Mario's mother, who is a social worker, told The Gleaner.

Mario went on an aggressive drive, speaking with his pastor, Kanute McDaniel, at the Harbour View Moravian Church, his principal, Margaret Campbell, of St George's College, Ibo Cooper, and friends at the Edna Manley College of the Visual and Performing Arts, and other friends, who all went on a campaign to raise the funds for the surgery and help him with further medical treatment.

In the end, they raised more than he needed, and on March 2, 2011, Mario underwent an 11-hour operation at the University Hospital of the West Indies to replace the cancerous bone in his left leg with the bone of a cadaver.

"It was such an outpouring," said his mom. "While I was worried, he wasn't at all."

But what kept the teen so firm in his belief?

"Honestly, I don't know. Something just took over my body," he declared with a laugh.

"I wasn't worried or anything. I guess it's just me. I'm always quite jovial and I can make a joke out of anything. When my close friends were crying and were so worried, I was laughing and they couldn't understand. I prayed a lot."

His mom added: "At one point I said, 'God, if you could send the money, why couldn't You have just sent the healing?' And he said to me, 'Mommy, Jesus said some things you have to go through to test your faith'. I then began to understand."

She continued: "I will be honest, this shook my faith, it really did. I couldn't understand what was happening. He was the one who was building me up."

Today, after 11 surgeries, nine rounds of chemotherapy, and hospitalisation for months at a time, Mario is thanking God for helping him survive bone cancer.

The teen is now doing follow-up treatment, and the doctors are amazed at how quickly the cadaver bone is fusing with his and how well his body is responding.

After being out of school for almost two years, Mario was able to return last year. He is now preparing to sit six subjects in the Caribbean Secondary Education Certificate examinations.

His dream is to one day enter either the field of accounting or psychology.

The budding singer even recorded a song earlier this year titled Infinite Love, a reflection of what he has been through.

Is he hoping to play football again?

"Oh no! I don't even think about that. I miss it, but I will stick to the Playstation," he laughed.

The positive teen's words of encouragement to persons suffering through illness: "Have faith, believe in God. Anything is possible."

At the end of his discussion with The Gleaner, Mario got up, hugged his mom, took up his crutches and hopped out of The Gleaner's office with a big, beautiful, bright smile.