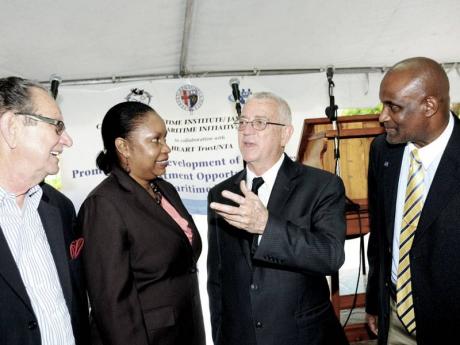 Jamaica stands to gain billions of dollars if the maritime sector receives the necessary investment.

Fritz Pinnock, executive director of the Caribbean Maritime Institute (CMI), gave eye-opening figures last Thursday during a presentation at the CMI to sensitise stakeholders and investors about the various job and investment opportunities in the sector.

Pinnock was joined by Jamaica College (JC) principal, Ruel Reid, and HEART Trust/NTA Executive Director Dr Carolyn Hayle as all three entities have come together to bring awareness to the sector's bright potential - potential which is even greater in light of the expansion of the Panama Canal, slated to be completed in 2014.

Pointing to "electro-mechanical technician" as one occupation arising from the industry, Pinnock said that maritime was about more than ports.

Pinnock noted that when an individual works on a ship, his way is paid so he have no expenses like rent. Putting it in context, he suggested that those workers could give back more to the island.

"I'm sure 40 to 50 per cent of that (investment) could come from remittances. What an impact that would have on Jamaica's economy!" he said.

Pinnock used The Philippines as an example of a nation putting the maritime sector to good use.

"Today, over 400,000 jobs and over 15 per cent of their GDP comes from just remittances from the maritime area. Jamaica, that is so strategically positioned ... there is tremendous opportunity here and the opportunity lies beyond just the expansion of the physical port facility," he said.

He pointed out that the industry was integrated as many of the engineers who come back from tours are snapped up by companies in other fields.

"During the recession, the Airports Authority was putting out ads 'preferably CMI graduates'. Why? Because they were coming with discipline and they were multi-faceted. Here is an industry that can hit the job market in a big way and we're doing more talking than action," he said.

Also addressing the meeting, Reid read the latest International Labour Organization executive summary report which stated that there was a global backlog of unemployment of 200 million.

"In addition, more than 400 million new jobs will be needed over the next decade to avoid further increase in unemployment," he noted.

The JC principal opined that Jamaica's economy was not meeting its potential and that the maritime sector could help change that.

"We have another opportunity through maritime to catch up and be the Singapore of the West. We want to make this our vision of 2030 - to use these maritime possibilities to be the catalyst to make the right structural adjustments to our economy," he said.

Hayle, in her contribution, encouraged potential students in the industry to not only get certified, but to know how to apply their knowledge in the real world.

"You can't have a skill without being able to have the academic underpinnings that translate that knowledge into real-time opportunities," she said.

Hayle noted that the global distribution system for any economy was made up of elements dealing with the air, sea, and information and communications technology.

Business process outsourcing, which she said more foreign investors were asking her agency about, is a major opportunity in the global market as it entails the IT component.

She was of the view that the collaboration of the three local entities would get Jamaica's graduates ready.

"So if we have the skills on the ground in terms of maritime, with the HEART skills, with maritime as well as the IT and logistics that are taught here at CMI, you can see that we have great opportunities," said Hayle.

The event expanded on the memorandum of understanding signed between the CMI and JC last year, with JC being a feeder programme for the CMI.