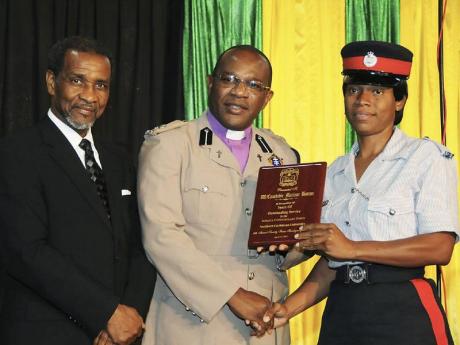 Constable Marlene Bonner (right) of the May Pen Police Station accepts her award from Bishop Gary Welsh, chief chaplain, Jamaica Defence Force, during the awards ceremony for the security forces at the Northern Caribbean University in Manchester on Saturday. At left is NCU president, Dr Trevor Gardner. - Contributed

Nineteen individuals - 17 women and two men - and one institution, the Jamaica Defence Force (JDF), were recognised as being "Models of Excellence in Nation Building" by Northern Caribbean University (NCU) during its 12th annual Prayer, Thanksgiving and Awards Service.

The service, which was held on Saturday at the NCU main campus in Mandeville, is part of the celebration of Jamaica's 50th anniversary of Independence.

Among the awardees was Constable Marlene Bonner from the Clarendon division of the Jamaica Constabulary Force (JCF), who, after just two years in the force, was recommended by her peers and superiors as an outstanding policewoman. In her short time in the division, she has had 49 court cases, including two major cases in which she was exceptional in her investigations and made arrests. She got a conviction in one and has the other still pending.

"The award has been a remarkable achievement," said an elated Bonner. "I am grateful to NCU for acknowledging my work. It came through a lot of hard work and dedication and my passion for investigation. This is just the beginning for me because I am also passionate about helping people and ensuring that justice is being served. My aim and focus is to be the best investigator in the JCF as I strive to maintain law and order in our country."

Said Pastor Michael Harvey, vice-president of spiritual affairs: "Over the years, our partnership and recognition of the security forces was focused on Region Three, but this year, in recognition of our 50th year as a proud independent nation, we decided to cover the entire island.

Harvey added: "We decided to particularly recognise the women who have fought and are fighting gallantly alongside men, highlighting their contributions in the JCF."

In accepting his award, Assistant Commissioner of Police Derrick Cochrane said: "I am humbled by this award for which I have been recognised for my service to law enforcement and nation building."

The 39-year veteran added: "In my thanks to God for his guidance over the past years, I want to challenge my colleagues not to be daunted as we carry the fight to the criminal elements which comprise less than one per cent of the society. It is a battle we cannot afford to lose as Jamaica remaining a peaceful and tranquil society rests on our victory."

The JDF, which was formed just a few days prior to Jamaica becoming a sovereign independent state within the Commonwealth of Nations in 1962, is celebrating 50 years of service to the island. The defence force was recognised for its role and support in securing Jamaica, particularly as it relates to assisting the Jamaica Constabulary Force in maintaining law and order.

"We do this year after year because we are not here only to receive from people, but to love, care, and serve the community in which we are located, and by extension, the wider society," said Harvey.