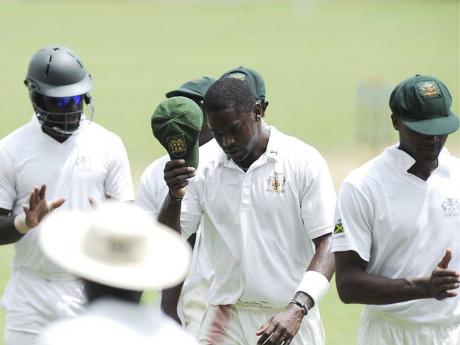 Jamaica's fast bowler Andrew Richardson (centre), who took five wickets against Barbados, lifts his cap and takes a bow as he acknowledges the crowd while the team leaves the field on day three of the WICB Regional Four-Day Tournament cricket final at Sabina Park yesterday. - Ricardo Makyn/Staff Photographer

Jamaica, with consecutive title liens in the past four years, were staging a fightback against Barbados at stumps at the end of yesterday's third and penultimate day of the West Indies Cricket Board (WICB) Regional Four-Day Tournament cricket final at Sabina Park.

The Jamaicans, who lost first innings points to the Barbadians and must win outright if they are to claim a record fifth straight hold on the title, ended the day on 133 for three for an overall lead of 115 runs.

With 98 overs slated to be bowled, weather permitting, today's final day could be a thriller.

Play is slated to resume at 9:30 a.m. with first innings top scorer Donovan Pagon on 42 and Danza Hyatt, 10, set to resume batting.

Earlier Barbados, replying to Jamaica's first innings total of 272, were dismissed for 291.

"The game is far from over and I think the Barbados team knows that as well," said Jamaica's captain Tamar Lambert.

"Anywhere in the region of 200 heading into the final day on this wicket we think is a really good total, as a lot of teams have struggled in the past to get such a score.

"We don't want to give up this title just like that, we want to go down fighting as at the end of the day we would prefer to lose this game outright than to go down on first innings," Lambert pointed out.

"We just hope that the weather that has been affecting the game will stay away tomorrow so that we can fight until the end," he declared.

Barbados, who began the day on 197 for three, 76 runs in arrears of first innings honours, lost Jonathan Carter as he added three to his overnight total to be dismissed for 99, caught off the bowling of Andrew Richardson with the score on 202.

Jamaica followed up the early success with the wickets of overnight batsman Dwayne Smith and wicketkeeper Shane Dowrich, for 29 and zero, respectively. Smith played down the wrong line to an in-swinger from Richardson and was trapped leg before wicket, while Dowrich was out the very next ball after he failed to negotiate another Richardson inswinger and was sent packing caught and bowled, leaving the visitors on 216 for six.

A 32-run seventh wicket stand between all-rounder Carlos Brathwaite and captain Shamarh Brooks swung the game back in Barbados' favour as they took the score to 248 for seven, before Brooks was caught at first slip for 19 off spinner Nikita Miller.

Brathwaite found another good ally in seamer Javon Searles and took the score to 259 before Searles was adjudged leg before wicket.

With Barbados needing 13 runs to draw level and having two wickets in hand, Sulieman Benn joined Brathwaite and after adding 10, Brathwaite was bowled behind his legs by Miller for 29 with the score on 269.

Last-wicket pair of Benn and Tino Best took their team past Jamaica's first inning total in a partnership that ended when Miller had Benn caught by Lambert at short mid-wicket for 10, leaving Best ended on 11 not out.

Jamaica, 18 runs behind and with little time, came out blazing with Parchment, who made 42, Pagon and to a lesser extent Hyatt, all scoring quickly.

"Credit to Jamaica they have been fighting well and have been batting with a plan in their second innnings," said Brooks. "But we plan to come tomorrow and try and restrict them to a total they can't defend and whatever total they give us tomorrow we will go in and think how to approach it in an orderly fashion," he added.